Food producer Unilever has overtaken Nestlé by taking the top spot on Oxfam’s Behind the Brands Scorecard – a campaign that keeps the world’s 10 biggest food and beverage companies accountable. Unilever topped Nestlé with an overall score of 71 per cent compared to Nestlé’s 69 per cent.

Oxfam’s scorecard ranks the 10 biggest food and beverage companies, the ‘Big 10’, on their policies and commitments to improve food security, sustainability and the lives of people living in poverty around the world. The scorecard covers seven themes: transparency, farmers, women, agricultural workers, access to land, water and climate change.

Eight of the Big 10 international food and beverage companies have improved their overall scores since February 2014, but French dairy producer Danone and the US-based Coca-Cola Company have failed to improve in the overall scorecard.

The Big 10 are clearly getting more serious about social and environmental issues, although the level of ambition still varies enormously across the companies with big gaps between the leaders and laggards. In the last two years, these companies have improved their policies on paper but the new Oxfam Behind the Brand briefing ‘Walking the Talk’ says they still have a long way to go in terms of implementing these new policies in practice.

UK-based ABF takes last place again on the scorecard list, only reaching 30 per cent in total. The other three companies at the bottom of the scorecard – Kellogg, Danone and General Mills – do not even reach half of Unilever’s score of 71 per cent. Danone also holds the dubious record of scoring the lowest on any theme in the scorecard – they scored only 1 out of 10 for supporting the rights of women farmers and agricultural workers; even the other laggards ABF and General Mills score better on this topic.

Monique van Zijl, International Campaign Manager for Oxfam’s Behind the Brands campaign said, ‘The farmers category was the lowest overall scoring theme on the scorecard. Six of the ten companies perform particularly badly on this theme and the majority of the companies still turn a blind eye to farmers in their supply chains. Extreme weather patterns are on the rise and destroy farmers’ livelihoods across the world. Now more than ever companies must take responsibility to support workers and farmers in their supply chain to adapt to climate change.

‘Behind the Brands shows that no company is too big to ignore the demands of their consumers; the same goes for their suppliers, agricultural producers and traders that are also starting to change in line with the demands of the Big 10.’ 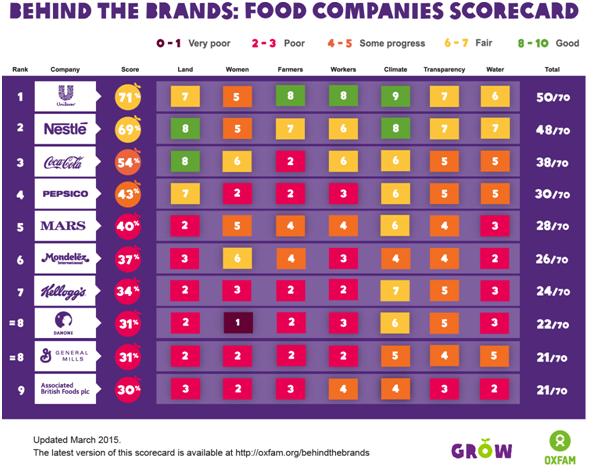 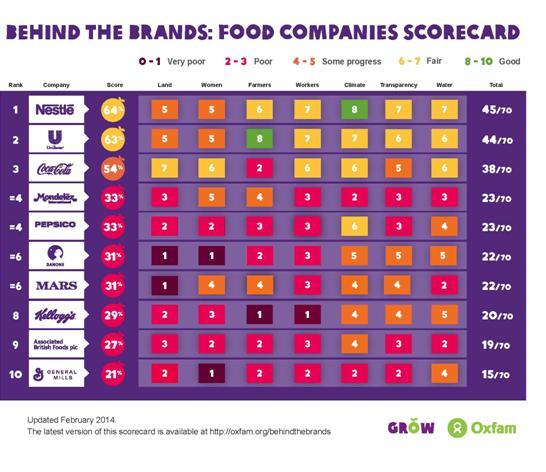