Philippines Typhoon Survivors 'Rise Up' in the True Christmas Spirit（只有英文）

On Bantayan Island, North Cebu, I find a home-made ukulele. When I play it, the crowd of people around me start singing ‘We wish you a merry Christmas’. I’m not sure who’s the most surprised. Christmas is big in the Philippines. In Cebu City, there’s a sign saying ‘The twelve weeks of Christmas’. They’re not joking. Christmas is normally the biggest event of the year, but this is not a normal year. 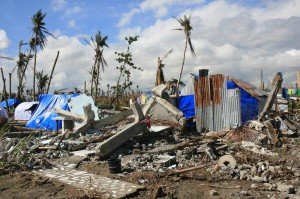 In Santa Cruz, just south of Tacloban, few buildings remain. Coconut trees lay uprooted or snapped in half. When the typhoon and storm surge came, one hundred people crowded into the small upstairs room of a community building.  Others survived because they had already left the village or managed to cling to trees that withstood the onslaught. Their arms wrapped tightly around the trunks. As the storm surge rushed in, they shouted to each other to climb further up the tree, to lock their hands together and not let go – I don’t know how any of them survived. At least 300 people lost their lives. Most people lost their homes, their belongings and livelihood. Now in tents, the few belongings that most have are basic items from relief distributions: food, hygiene kits, mats, jerry cans and kitchen sets. 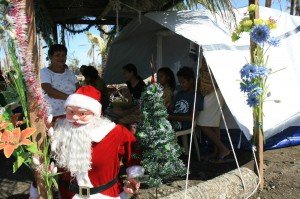 A large Santa stands in a makeshift stall next to a Christmas tree and festive decorations. (Photo: Jane Beesley / Oxfam)

Walking through what looks like a demolition site, I am surprised to see a small makeshift stall with a large Santa, a Christmas tree and festive decorations strung along the front. It looks like Santa’s grotto. ‘We found these Christmas decorations in the debris, so we washed them and put them up,’ explains Rowen, 25. ‘We wanted to celebrate Christmas in some way.’

Rowen, like everyone I speak to, says: ‘Christmas celebrations this year will be different from other years. We’re happy because we’ve survived, but sad because others haven’t. We’ll celebrate Christmas, but in a simple way this year.’ Most people are grateful for ‘the good fortune’ they’ve had. I frequently hear, ‘We’ll celebrate Christmas in a quiet way this year, but we’ll share our good fortune with others.’ Normally, there are a lot of parties, a lot of food eaten, and a lot of money spent. One of Oxfam’s vehicle drivers tells me that many people across the Philippines have decided not to have parties, or to spend so much money. Instead, they will send what they have saved to support people who have been affected by Typhoon Haiyan. Another driver tells me, ‘Something like this really makes you appreciate what really matters in life. This is what I’ll be celebrating and giving thanks for this Christmas.’ Both men are from Tacloban. 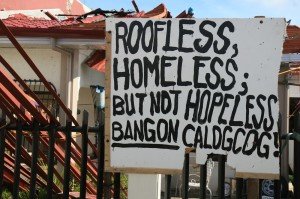 A sign of hope hangs amid the wreckage. (Photo: Jane Beesley / Oxfam)

Again and again, I see two words written like graffiti on the remains of walls and buildings, or purposely written on signs: ‘bangon’ and ‘tindog’, meaning ‘rise up’ and ‘stand up’. I think these two phrases sum up the spirit of the people. This Christmas across the Philippines, especially in areas devastated by the typhoon, people will be rising and standing up, determined to support their communities and each other in recovering from one of the worst disasters to hit the country. But the size of the devastation is so great. For long-term recovery, the individuals, the communities and the Philippines cannot stand alone.

This year, I will be spending Christmas in Tacloban, but wherever you are, I wish you a happy, peaceful and safe Christmas.