The effects of climate change are becoming increasingly pronounced in Hong Kong. The Hong Kong Observatory announced record-breaking high temperatures in July 2022, which directly affected the well-being of outdoor workers. Today, Oxfam Hong Kong (OHK) published its study ‘Sanitation Workers’ Working Conditions at Refuse Collection Points (RCPs) in Extreme Heat’. The research findings show that the average temperature at RCPs is 32°C, which is even higher than the average temperature outdoors. More than 65 per cent of interviewees said they always feel unwell when they work at RCPs because of the stifling heat and poor ventilation. Some sanitation workers pointed out that resting areas in renovated and newly-built RCPs are still insufficient, which shows that departments responsible for the upgrades have failed to meet workers’ needs and offer them a place to stay cool and rest. OHK believes it is necessary to separate working and resting areas, and urges the government to establish clear and objective guidelines on when work needs to cease in extreme heat in order to protect workers’ health.

Wong Shek-Hung, Director of Hong Kong, Macau, Taiwan Programme at OHK said, ‘Not only are sanitation workers exposed to the scorching heat when working outdoors, they also lack a suitable space that allows them to rest and cool down.’ The government's current measures to tackle climate change focus on emissions reductions, but what is urgently needed are climate adaptation measures related to the most vulnerable people so they can adapt to it now. That is why OHK will distribute portable neck/waist fans to 4,000 sanitation workers. This will be done to enhance their ability to adapt to climate change and reduce their risk of suffering from heat-related illnesses.

OHK commissioned the Social Policy Research Institute to survey 200 outsourced sanitation workers from the Food and Environmental Hygiene Department (FEHD) from June to July 2022 and conduct in-depth interviews with another six sanitation workers from different districts across Hong Kong. Almost 70 per cent of interviewees were aged 60 or above, and more than 30 per cent worked in renovated or newly-built RCPs.

The research team found that the average temperature inside RCPs was as high as 32.2°C, which was even higher than the record-breaking average temperature in July 2022 (30.3°C). Ninety per cent of interviewees worked inside RCPs, and over two-thirds (67 per cent) felt physically unwell when working at RCPs, including renovated and newly-built ones. Two-thirds (66 per cent) attributed feeling unwell to the hot and humid environment, as well as the poor ventilation. Further, more than a quarter (27 per cent) of interviewees who worked in renovated or newly-built RCPs considered pests a major reason for feeling unwell. The proportion is noticeably higher than that of interviewees working at old RCPs (18 per cent), which indicates that newly designed RCPs are relatively incapable of preventing pests.

According to the Labour Department’s ‘Prevention of Heat Stroke at Work in a Hot Environment’, employers should ‘arrange employees to rest regularly in a cool or shady place during very hot periods’. However, OHK’s study shows that almost two-thirds (64 per cent) of interviewees were not protected according to the guide. Half of the interviewees also found it difficult to rest inside RCPs. One-sixth (16 per cent) attributed this to the lack of resting space, while 30 per cent and 41 per cent respectively attributed this to the poor hygiene and stifling heat. Most of the workers (78 per cent) said they could only find cooler areas outside, which has led members of the public to misunderstand and accuse them of being lazy at work.

And although the Guide states that employers should provide sanitation workers with drinking water and hats, 43 and 13 per cent of interviewees were not provided with drinking water and hats respectively. It is clear that some employers did not follow the guidelines, however, the Labour Department also did not carry out inspections that were frequent or adequate enough to enforce them.

Further, 44 per cent of interviewees said their company did not arrange any occupational safety trainings or workshops for them, while 35 per cent said they did not know about the Labour Department and Occupational Safety and Health Council’s ‘Guide for Occupational Safety and Health’. The current policy on heat prevention is clearly inadequate, and the lack of awareness of occupational safety has increased workers’ risk of suffering from heat stroke and other heat-related illnesses.

The government – as the largest employer that has hired the most sanitation workers through outsourcing – has the duty to safeguard workers’ safety and rights. To this end, OHK urges it to do the following:

About Oxfam
Oxfam is a global organisation committed to creating a world without poverty through its advocacy, development and humanitarian work.

More than 65 per cent of interviewees said they always feel unwell when they work at RCPs because of the stifling heat and poor ventilation.

The RCPs located in markets smelly particularly foul because of the wet waste. Sanitation workers must bear with the strong smell even when they are working or having meal.

Some workers said the fans installed at RCPs only reduce the pungent odour slightly, and do not cool them down.

This RCP located in Kowloon has relatively more open areas. However, it is still extremely hot and stuffy as the location is poorly ventilated.

There is no refuse compactor in this RCP; waste is often piled up in a corner. Most of it is wet waste and comes from the markets nearby. This has exacerbated the RCP’s pest problem and caused workers to feel unwell.

There were originally no resting spaces for sanitation workers in this RCP located in the New Territories. So, workers used materials they found among the refuse (including the fans) to create a small space where they can eat and rest. 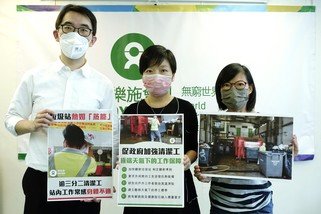 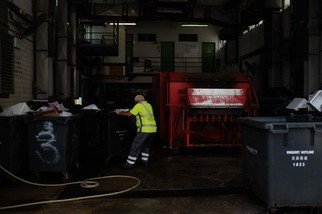 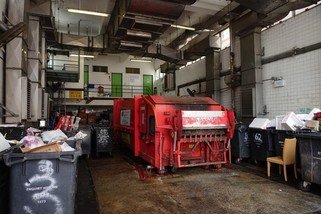 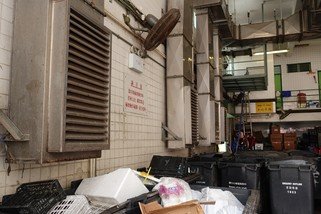 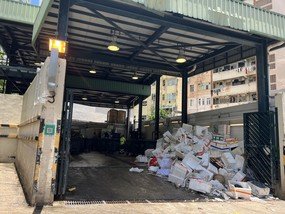 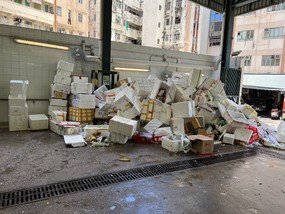 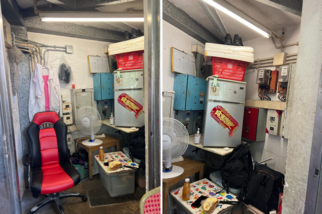 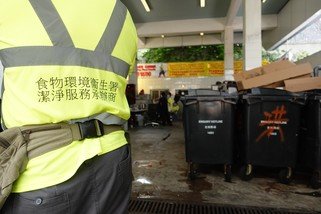