On 28 February 2014, a conference on sustainable Chinese overseas foreign direct investment (OFDI) in agriculture organised by the Research Center for Rural Economy of Ministry of Agriculture with support from Oxfam Hong Kong, took place in Beijing.

More than 80 people attended, including officials from the National Development and Reform Commission, Ministry of Finance, Ministry of Commerce and Ministry of Agriculture, scholars, researchers from universities, journalists, representatives from chambers of commerce, Chinese companies, and local and foreign NGOs. 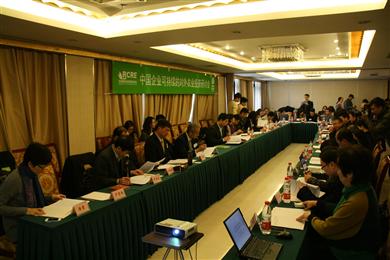 Conference on Sustainable Chinese Outward Foreign Direct Investment in Agriculture held in Beijing by the Research Center for Rural Economy of Ministry of Agriculture on 28 February 2014.

Investing in agriculture in other countries is a key component of China’s “Going Out” policy, which was officially launched in 2001. On 19 January 2014, the Chinese government stated the need to implement strategies promoting China’s OFDI in agriculture at a greater pace in its No. 1 Central Document – an annual policy statement issued by the Communist Party’s Central Committee and the State Council. The Document stressed mutually beneficial collaborations with neighbouring countries in agricultural production and agricultural trade.

To complement the policy goals set out in the Document and the “Going Out” strategy, experts, researchers and other stakeholders were invited to the conference to discuss ways in which businesses could be encouraged to improve the way they invest abroad, and ways to ensure that the investments are sustainable and beneficial to both China and the host countries.

At the conference, Hongyuan Song, Director of the Research Center for Rural Economy of Ministry of Agriculture, discussed the draft report “Chinese agricultural outward foreign direct investment”. The report discusses China’s OFDI in agriculture and from the points of view of the government, business and the public. It explores the impacts that it has had on the host economy and society, and ways of promoting a dialogue on sustainable investment models. The report attracted substantial interest from delegates as well as comments from officials, businesses, and other groups.

Hongyuan Song also discussed the unique aspects of Chinese OFDI in agriculture, the challenges involved, related policy development, and ways in which Chinese companies engaged in such investments. He also offered policy recommendations.

Discussions of and case studies in OFDI in the agricultural sectors of Myanmar, Laos, and Zambia were facilitated by three leading scholars – Tao Li, Yun Fang, and Haifang Liu. They spoke on the opportunities and challenges that OFDI in agriculture has brought to the countries, both socially and economically. Tao Li is an associate professor of South East Asia Research Centre at Yunnan University’s Institute of International Studies; Yun Fang is a researcher from the Yunnan Academy of Social Sciences; and Haifang Liu is a professor at Peking University’s Center for African Studies.

The Research Center for Rural Economy is revising the report based on discussions generated at the conference. The report will be published in 2015.