The book ‘Sustainable Chinese Outward Foreign Direct Investment: Opportunities and Challenges’ was officially published in Beijing on 24 July 2012. The book was written and edited by the Center for Human and Economic Development Studies of Peking University alongside international development and humanitarian relief organization Oxfam. The book outlines the opportunities and problems Chinese corporations encounter when investing overseas, and provides solutions. 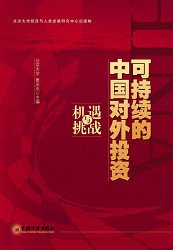 The book also discusses Professor Zhang Yunling’s (Director of the Chinese Academy of Social Sciences) strategic insights. He points out that Chinese outward foreign direct investment is facing many challenges despite rapid development in the area. In light of this, it is important to continue to explore new forms of outward foreign direct investment to ensure its sustainable development.

In the book, Professor Lu Xing from the GMS (Greater Mekong Sub-region) Study Center of Yunnan University also analyses the current situation among Chinese corporations in the Greater Mekong Sub-region in regards to corporate social responsibility. According to Professor Lu Xing, Chinese corporations are often criticised when “going out” (i.e. foreign investment). To improve companies’ corporate social responsibility, they need pressure from society. However, civil organisations in China currently lack power and the channels through which they can voice their concerns.

In addition, Oxfam has commissioned research institutes to analyse the laws on Chinese outward foreign direct investment. This was done to improve the understanding of related laws and regulations among government officers, entrepreneurs, scholars and civil organisations, in order to promote the sustainable development of outward foreign direct investment.

In general, the book aims to promote communication between different parties and further explore related theories and studies in an attempt to provide constructive suggestions for the improvement of policies.

Information from the publisher