Oxfam Hong Kong (OHK) released the Hong Kong Poverty Report: Poverty and Employment During the Pandemic. It found that prior to the pandemic (2019), the richest decile of households made 34.3 times more than the poorest decile, but that number surged to 47.3 by the first quarter of 2022.

Kalina Tsang, Director General at OHK, said: ‘COVID has widened the gap between the rich and poor in Hong Kong, and the problem of unemployment and underemployment among the poor remains severe. Poverty is one of the major issues that the new administration must address. We hope to see policies that actively assist the poor build a stronger post-pandemic recovery in the administration’s first Policy Address.’

In the report, OHK analysed data from the Census and Statistics Department from 2019 to 2021 and the first quarter of this year, and divided the median monthly household income into deciles (the first decile being the poorest, and the tenth being the richest). The poorer the group, the more severe the drop in income. The incomes of the poorest decile fell by more than 20 per cent compared to their incomes before the COVID outbreak. And compared to figures from 2019, the incomes of the second and third deciles fell by nearly 10 per cent – significantly higher than the overall decline of 2.4 per cent in the first quarter of 2022. On the contrary, the median monthly income of households in the seventh to tenth decile increased, and the income of the richest decile increased by 6.3 per cent.

In terms of their working hours, as many as 77 per cent of those living in poverty worked fewer than 20 hours a week in the first quarter of 2022. This is a 59 per cent increase from 2020, reflecting the worsening problem of underemployment among low-income workers.

The number of people who were economically inactive and poor also rose sharply, reaching 1.09 million in the first quarter of this year – up 3.2 per cent from 2020. Among them, 466,000 were elderly people aged 65 or above; this is a sharp increase of 15.2 per cent compared to 2020. These figures also mean that one out of every two elderly people who do not have a job is poor. The serious shortage of childcare facilities has also led to the continued low labour participation of women who live in poverty. Nearly 80 per cent of them are unable to work to help their families.

OHK believes that the minimum wage plays an important role in the working poor’s livelihoods as they build back from the pandemic. If the minimum wage were reviewed and adjusted annually, and were increased to HK$45.4 per hour as recommended by OHK, it would benefit nearly 340,000 low-wage workers. It would also cover nine per cent of the current total number of employees. Many countries and cities around the world have raised their minimum wage during the pandemic to ensure that companies do not cut costs by exploiting low-wage earners. We also call on the government and other employers who are able to go one step further and pay a living wage, i.e. HK$58.9, to employees who earn lower wages.

The government should also extend the Temporary Unemployment Relief scheme to the end of the year so that those who are currently unemployed can receive the support they need. This would benefit an additional 120,000 people and would require HK$1.2 billion. In addition, the government's measures to relax the minimum working hours requirements for the Working Family Allowance due to the pandemic ended in May. OHK recommends that the government extend these measures and further reduce the minimum working hour requirement to 36 hours, so casual and temporary workers can also benefit.

To assist the middle-aged and the elderly who are unemployed, OHK proposes an increase in the subsidy amount by HK$1,000 for employers who hire unemployed persons aged 40 or above under the Government’s Employment Programme for the Elderly and Middle-aged. In addition, the current Employees Retraining Board’s Love Upgrading Special Scheme only covers the unemployed and underemployed. OHK calls on the government to also include those who are working so that they can learn new skills and choose to change careers during the pandemic.

Further, to demonstrate the government's commitment to low-income carers, it should regularise and increase the number of beneficiaries under the Pilot Scheme on Living Allowance for Carers of Elderly Persons from Low-income Families, and remove the regulation that stipulates that carers cannot receive Old Age Living Allowance or support from the Comprehensive Social Security Assistance Scheme. At the same time, it should strengthen childcare services, provide independent childcare centres in priority to areas that lack this support, and enable women from low-income households to work and enter the labour force.

OHK has been working to alleviate poverty in Hong Kong for more than 25 years. It is also directly assisting the working poor with several ongoing projects. For instance, it is working with families that live in subdivided flats to improve their living conditions by offering them storage space and helping them make their spaces more functional. On top of its advocacy work, it has also distributed portable fans to 4,000 sanitation workers to help them stay cool during extreme heat. And it has been empowering parents and children from low-income households with information to improve their nutritional intake. These and other projects aim to alleviate some of the everyday challenges of the working poor.

To mark the International Day for Eradication of Poverty on 17 October, OHK launched its Rethink Poverty campaign to encourage the public to learn more about the different facets of poverty, and work with OHK to bring about change. Learn more: https://bit.ly/Empowermentmarket

About Oxfam
Oxfam is a global organisation committed to creating a world without poverty through its advocacy, development and humanitarian work.

Learn about and fight poverty in Hong Kong with Oxfam!

Donate to support our work 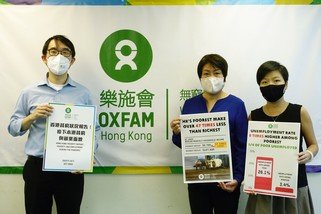 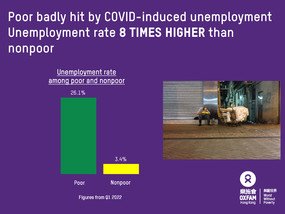 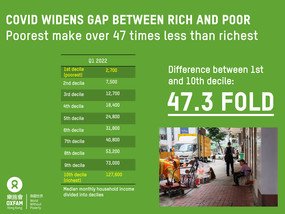 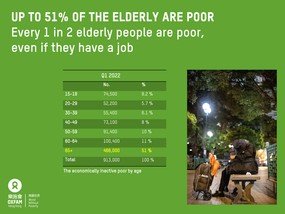 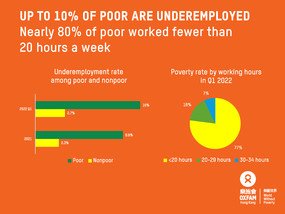