At the beginning of January 2019, a blizzard struck the Yushu Prefecture in Qinghai Province and lasted over 40 days. One city and five towns in the prefecture suffered from the snowstorm to various extents. Moderate to severe snowfall was recorded in several counties for 41 days. The most severely affected townships were Qingshuihe, Zhaduo and Zhenqin, where the snow depths in some areas reached over 45 cm, and the lowest temperature was below -30℃. As a result, around 5,000 livestock died in several counties since they were unable to forage in such cold and tough conditions.

donate now
*Oxfam will use the donations for emergency, rehabilitation, or community development projects in China.

After receiving a request from the government of Chengduo Country for assistance, Oxfam sent staff to form a joint assessment team together with the Bureau of Poverty Alleviation & Development of Chengduo Country and the township staff. The team then travelled to Qingshuihe, Zaduo and Zhenqin, which were the townships hardest hit by the snowstorm, to carry out disaster assessments. Through them, the team realised they urgently needed to distribute relief to keep survivors warm.

Oxfam allocated RMB 575,136 to assist severely affected and impoverished villages in Qingshuihe, Zhaduo and Zhenqin, and gave priority to affected households that raised livestock. There, we reached 13,267 people from 4,339 households in 15 villages with quilts, coats and mattresses to ensure survivors could stay warm. Of the people who received these relief items, 363 were seniors who lived on their own.

While distributing relief items, Oxfam staff, the staff from Bureau of Poverty Alleviation & Development of Chengduo Country, and civil servants of counties worked together to ensure the supplies were distributed to each of the survivors.

During emergencies, we at Oxfam do all we can to ensure that our response and our staff do not cause harm to the individuals and communities we work with, including exploitation and abuse. We also stress the importance of and ensure that women have the right to information, participation and can make complaints/give feedback.

‘The quilts are very warm! I’m so grateful to Oxfam.’
——Ximao

Ai Da, a survivor who lived in Gaqing Village in Qingshuihe Township, told us that 57 of her yaks had died and that she had tried to save the rest by giving the few quilts she had to the weaker yaks to warm them. Despite her best efforts though, 44 more died, making life even tougher for her.

Ai Da’s predicament after the snowstorm was commonplace. Quilts were used to keep yaks warm or given to young people who herd yaks or graze them. As such, women, children and old/weak yaks who were left behind did not have enough quilts to keep them warm. In response, Oxfam immediately transported disaster relief supplies from its warehouse to the disaster area to ensure survivors could stay warm.

After distributing the relief items, we went back to the communities to learn how/whether the women benefited from our response. One of them was Ximao, a 72-year-old who lives alone in one of the nine villages in Zhenqin Township. Ximao told us, ‘The quilts are very warm! I’m so grateful to Oxfam.’

Another person we met was Dangzhen Jiala, a herder from Gaqing Village in Qingshuihe Township. She received a coat from Oxfam and said that it was extremely warm and very useful. Since it snows often in Qingshuihe Township, the coats can be worn for more than half a year. Ala, 48, also said that Oxfam’s coats were even warmer than lamb coats and were very suitable for the climate there.

The blizzard killed around 5,000 livestock in Chengduo Country.

Despite having quilts, the snowstorms still claimed the lives of many yaks.

Ai Da holding some of her yak’s feed and poly woven bags to keep them warm. The snowstorm killed 44 out of 57 of her yaks, which badly affected her livelihood.

Oxfam immediately transported disaster relief supplies from its warehouse to the disaster area and distributed them to survivors.

Herders were grateful to receive quilts and coats. 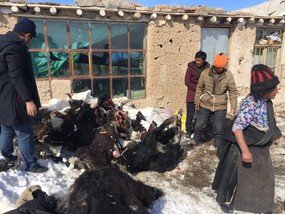 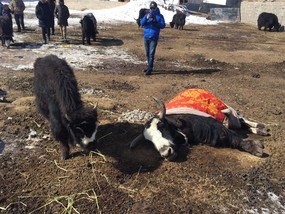 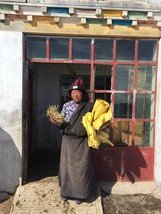 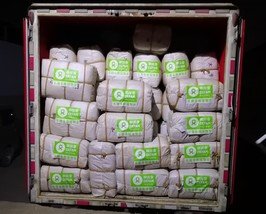 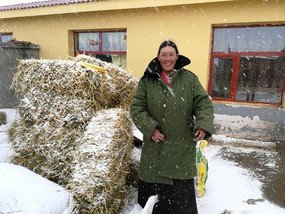