In early June, floods hit southern China which, as of 3 July 2020, has affected more than 19.3 million people and has left 121 people dead or missing in 26 provinces (autonomous regions and municipalities), including Guangxi, Guizhou, Guangdong, Hunan, Jiangxi, Chongqing. Of them, Guangxi was worst hit.

According to statistics from the emergency management office of Guangxi, more than 1.2 million people were affected in the area, and crops on over 80,000 hectares of land were damaged; more than 800 houses also collapsed. Yangshuo County was severely affected by the floods after experiencing record-breaking rainfall. More than 156,000 people there were affected, and a large number of survivors’ homes were destroyed. Emergency supplies and food were urgently needed.

donate now
*Oxfam will use the donations for emergency, rehabilitation, or community development projects in China.

In Guangxi, our local partner organisation in Guilin, Blue Sky Rescue, immediately assessed the disaster and responded. From 7 to 8 June, a total of 56 rescuers were dispatched to transfer about 1,300 survivors in Yangshuo County and Pingle County to safety.

Blue Sky Rescue has carried out many emergency responses in Guangxi before and has been a project partner of ours for many years. Their rescuers have also taken part in many of the humanitarian training sessions we have organised.

Together with our partners, we also immediately conducted a needs assessment and determined a material distribution plan. On 23 June, we received a HK$550,000 grant from the HKSAR Government's Disaster Relief Fund (DRF) to support the survivors of the floods in Guangxi. With this, we distributed emergency food relief, including 88,500 kg of rice and 300 five-litre bottles of cooking oil, to 5,900 survivors in Gaotian Town and Jinbao Townships of Yangshuo County whose houses had collapsed, were seriously damaged or were flooded. The distribution ended on 3 July.

Whenever Oxfam responds to an emergency, we pay special attention to the needs of remote and poor communities that have limited access to resources. We also focus on vulnerable groups, such as ethnic minorities and women.

The DRF requires that this fund be used for this specific disaster, in accordance with the funding application submitted by Oxfam and approved by the DRF. After the completion of our relief work, we would carry out an evaluation, and submit an evaluation report and financial report (including external auditing report) to the DRF.

Our partner organisation for this response is Blue Sky Rescue from Guilin, with whom we have worked for many years. They have joined many of the trainings sessions we organised on The Sphere Project: Humanitarian Charter and Minimum Standards in Humanitarian Response. (Photo: Blue Sky Rescue)

From 7 to 8 June, a total of 56 rescuers from Blue Sky Rescue were dispatched to transfer about 1,300 survivors in Yangshuo County and Pingle County to safety. (Photo: Blue Sky Rescue)

Ensuring every dollar is spent responsibly every step of the way

Whenever we respond to disasters, we ensure that donations are used for the people affected by the disaster. We have a strict programme quality monitoring and financial auditing system. Oxfam staff are also in charge of the whole process from sourcing to purchasing to distributing relief supplies, and the entire process is open, fair and transparent.

In an effort to save money while ensuring the quality of the supplies, Oxfam will quote prices from three sources. By doing this, we also ensure we reach as many survivors as possible with the limited amount of resources we have. We will also sign a contract with the supplier and pay the supplier directly.

Whenever we distribute relief, recipients sign a record, and details of the items that are distributed in the village will also be publicised. After an emergency response, our staff will return to the location and interview survivors and village representatives who have received relief from Oxfam. These interviews are conducted to understand their thoughts on the distribution process and standards.

In addition, we at Oxfam allocated our own funds to support victims in Guizhou Province. We used RMB100,000 to distribute emergency food and sanitation items to 942 households in impoverished communities affected by hailstorms in Qingshan and Luohan Townships in Pu'an County, Guizhou Province. Each household received 19 kg of rice and a hygiene kit, which includes face masks and other protective equipment.

In Bijie City and Tongren City in Guizhou Province, Oxfam used RMB558,000 to meet survivors’ immediate needs by distributing relief supplies, including rice, cooking oil and quilts. We reached over 5,000 people affected by the disaster from 1,215 families in four villages in Bahuang and Dashuixiang Townships in Tongren City and Biejie City respectively.

We will continue to keep a close eye on the situation in communities affected by the disaster. We will also maintain regular contact with local partners and communities, and provide relief/assistance to needy and vulnerable groups.

Whenever relief items are given to survivors, recipients sign a distribution record, and details of the items that are distributed in the village are publicised.

Whenever relief items are given to survivors, recipients sign a distribution record, and details of the items that are distributed in the village are publicised.

We are distributing rice and cooking oil to survivors in Gaotian Town, Yangshuo County.

According to villagers in Oujia Natural Village and Long Village, Gaotian Town, Yangshuo, Guangxi, this was the worst flood they had ever seen. Water levels from this flood reached at least two metres higher than the floods in 2016, which were already detrimental (water levels in 2016 reached the line on the wall near this woman’s knee; this year, water levels reached roughly a metre above her hand). 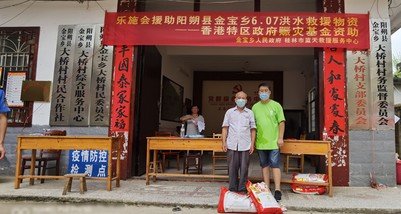