Oxfam’s latest report ‘Research on Low-Income Casual Work in Hong Kong’ reveals that over 80 per cent of the casual workers it interviewed lacked labour protection. The organisation is thus urging the government to resume reviewing the Employment Ordinance to protect casual workers, and to stop making working poverty and poverty among women any worse.

The Census and Statistics Department recently announced that the city’s Gini coefficient rose by 0.002 to 0.539, from 0.537 in 2011 – an increase indicative of the growing disparity between the rich and poor. Hong Kong’s Gini coefficient remains one of the highest among developed economies. In fact, according to the Census and Statistics Department’s Thematic Report: Household Income Distribution in Hong Kong, the richest 10 per cent of the city’s households earn close to 44 times more than the poorest 10 per cent. It also revealed how an increasingly fragmented labour force has left many workers vulnerable.

According to Hong Kong’s Employment Ordinance, an employee who has been employed continuously by the same employer for four weeks or more, and who works at least 18 hours each week is regarded as someone who is employed under a continuous contract. He/she is entitled to rights such as rest days, annual leave with pay and sickness allowance, severance and long service payment, etc. The Hong Kong government defined the ordinance in 1968. However, besides the minor amendments that were made to the definition of ‘continuous contract’, no amendments were made or supplementary information provided about the employment protection of those employed under ‘non-continuous contracts’. The outdated employment law now has loopholes, and so it fails to provide employees with adequate protection and fails to cope with the structural changes in the labour market.

According to Census data, close to 150,000 people were casual workers who took up these kinds of ‘non-continuous contract’ (or ‘non-4.18’) jobs in the private sector – 16.4 per cent more than the number in 2001. According to the ‘Hong Kong Poverty Situation Report’, among the economically active poor population, those engaged in part-time work rose from 13.6 per cent in 2012 to 19.2 per cent in 2015. This increase of close to six percentage points reflects how the fragmentation of the labour force and poverty are closely related.

To better understand the challenges these workers face, Oxfam commissioned Policy 21 to conduct a survey that targeted casual workers who are not employed under a continuous contract, and whose household income is less than 70 per cent of the medium household income in Hong Kong. A random sample was interviewed.

‘The research showed that women from low-income households have limited career choices as many of them are responsible for taking care of their families. With the lack of labour protection casual employment offers, poor families are unable to lift themselves out of poverty.’ said Oxfam’s Hong Kong Programme Manager, Wong Shek-hung.

The majority (91.1 per cent) of respondents indicated that they were taking up one non-continuous contract job; the four jobs respondents took up most were waiter/dishwasher, salesperson, services attendant and domestic helper.

A total of 20.4 per cent of respondents worked 20 days or more per month, which was on par with full-time workers. However, they did not have the same rights or benefits that were given to full-time staff. They earned an average monthly income of HK$3,936, while the average family income stood HK$16,590; on average the income of respondents accounted for 29 per cent of their household income.

Over 80 per cent of casual workers interviewed were not entitled to sick leave, payment of wages in lieu of notice, statutory holiday pay, sickness allowance, annual leave, long service payment, severance payment or end of year payment, while 78 per cent of respondents said that they were not covered by employees' compensation insurance. In fact, only 24 per cent of respondents were enrolled in an MPF Scheme despite the fact that their employment duration exceeds the 60-day requirement. One of the explanations for this is that some casual workers were forced to claim that they are self-employed.

As 76.5 per cent of respondents did not sign written contracts with their employers, some of them were not clear about the contract terms, which made it hard to protect the rights of these workers.

In response to the findings of the study, the organisation proposes that, firstly, the Labour and Welfare Bureau, and the Panel on Manpower of the Legislative Council should urge the Labour Advisory Board to resume its review of the ‘4.18’ rule. Oxfam suggests that the rule should be relaxed so that employees who work 72 hours per month can also be protected under the Employment Ordinance. The government should also study practices in Japan, Singapore and Taiwan, where they calculate labour protection proportionate to employees’ working hours.

Secondly, the government should simplify LIFA application procedures. Oxfam suggests that supporting documentation should only be required when the applicant applies for the first time, and that proof of working hours and income should not be required if their pay and working hours remain unchanged in the following six months. In addition, the government should provide LIFA applicants with more support. For instance, it can provide application form filling assistance outside of business hours and follow up on applications.

Finally, Oxfam urges the government to enhance employer and employee education, and remind employees to understand how they are protected under the Employment Ordinance. They should also ask their employers about employment protection when seeking employment so that they will not be forced to claim themselves “self-employed” and their labour rights can be properly protected. Furthermore, the Labour Department should step up inspections of companies and prosecute employers who do not provide their staff with sufficient coverage through employees' compensation insurance or enrol eligible employees into an MPF scheme. Employers should also be educated about the importance of following the Employment Ordinance so that they do not exploit their employees.

‘Those who work as casual workers – whether or not they chose to take up this kind of work – should be adequately protected by labour laws. As the new CE and government officials take office, Oxfam urges the government to amend existing labour policies. Doing this would enable Hong Kong’s labour market to become a human economy that rewards those who work hard,’ said Kalina Tsang, Head of Oxfam’s Hong Kong, Macau, Taiwan Programme. 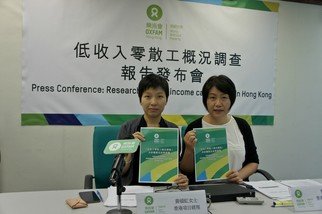 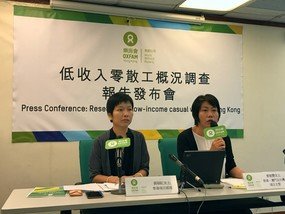