With the UN Climate Change Conference (COP) in Glasgow in full swing, Oxfam Hong Kong released a research report today entitled ‘Impacts of extreme weather on subdivided flat residents’ to demonstrate the urgent need for climate adaptation measures for vulnerable communities. The report revealed that nearly 60 per cent of the surveyed subdivided flat residents in Hong Kong experienced extreme weather more acutely, even at home. Temperatures in their flats were even higher than the outside, and over a quarter saw damage to their flats during typhoons and rainstorms, while landlords rarely paid for repairs.

Although the government is committed to achieving carbon neutrality by 2050, Oxfam Hong Kong points out that it has not formulated specific climate adaptation goals and measures geared towards the poor. Oxfam Hong Kong urges the Hong Kong government to develop policies to support those living in subdivided flats/poor living conditions adapt to climate change, and speed up the construction of public housing to help subdivided flat residents cope with increasingly frequent extreme weather events.

Wong Shek Hung, Oxfam Hong Kong’s Director of Hong Kong, Macau, Taiwan Programme, said: ‘Extreme weather brought about by climate change, like increasingly hot summers, aren’t just affecting the poorest when they work outdoors. Their homes have become so hot they’re like bamboo steamers – temperatures are sometimes even hotter than they are outdoors. Some also see such bad damage to their flats during typhoons and rainstorms that they need to use an umbrella indoors. The government's current measures to tackle climate change focus on emissions reductions, but what’s urgently needed are climate adaptation measures related to the most vulnerable people so they can adapt to it.’ Wong also pointed out that although the government is committed to achieving carbon neutrality by 2050, it has not set/formed specific climate adaptation goals and measures geared towards the poor.

Speaking about Oxfam International’s work on climate adaptation at COP26, Kalina Tsang, Oxfam Hong Kong’s Director General, added: ‘We’re calling on wealthy nations to live up to their promise made 12 years ago, and deliver US$100 billion a year to help poor nations adapt to climate change and reduce emissions.’ To make amends for prior shortfalls, she said the plan must aim to deliver larger sums in 2022-2025 above US$100 billion – most of which must be in the form of grants rather than loans. Further, half of all climate finance must be used for climate adaptation, so that the poorest are better able to deal with increasingly frequent extreme weather they are currently facing.

Oxfam Hong Kong commissioned Social Policy Research Limited to interview 200 people from low-income backgrounds who lived in subdivided flat across Hong Kong in September this year, and further conducted in-depth interviews with 15 of them. Over 80 per cent of respondents lived in flats smaller than 150 square feet, with about 73 square feet of living space per capita, which is nearly less than half of the 141 square feet per capita area that is available in public housing this year.

Poor ventilation in subdivided flats is also trapping heat indoors. Oxfam Hong Kong’s survey found that nearly 60 per cent of the respondents were dissatisfied with the poor ventilation in their flats, which made it feel hotter inside than outside. Further, close to 20 per cent did not have windows, making ventilation worse and their flat even hotter.

The research team also measured the temperature inside and outside the subdivided flats and found that nearly half (45.5 per cent) of the flats were hotter than outside – some were even 5.8 degrees Celsius hotter. The hottest flat saw temperatures soar as high as 35.1 degrees Celsius.

Nearly 70 per cent of respondents said that the intense heat affected their everyday lives, especially their physical health. They also found it difficult to work/study, and experienced more stress. Nearly a quarter of respondents added that with the heat, they saw an increase in mosquitoes and rodents. Two interviewees had experienced heatstroke, and one of them even had heat cramps.

Over a quarter of respondents also said that their flats would see some sort of damage during typhoons or rainstorms. Of them, over 80 per cent said water would seep/leak through the walls, and one-quarter said that the windows would also be damaged. Some interviewees said that their landlords were often unwilling to repair their flats, and left them to pay for the repairs on their own, which added to their financial burden.

Despite the poor living conditions though, as many as 98 per cent of respondents had not applied for transitional housing; 20 per cent of which did not do so because they believed the tenancy period was too short. Since they would only be able to live in transitional housing for two to three years, they were worried they would not be able to move into public housing before or right after their tenancy ended. Further, moving flats is a hefty financial burden, so they would rather continue living in a subdivided flat.

In Hong Kong’s Climate Action Plan 2050 released last month, the government outlined their climate adaptation and resilience measures, however, most of these focused on infrastructure, flood control and drainage. Oxfam Hong Kong believes that while the government is doing its best to speed up the construction of public housing, it must also support subdivided flat residents who live in poor living conditions to enhance their ability to adapt to increasingly frequent extreme weather.

Oxfam Hong Kong recommends enabling subdivided flat residents to apply to have these items installed in their flats through the government’s Assistance Programme to Improve the Living Environment of Low-income Subdivided Unit Households. The organisation also recommends extending the duration of the programme, which will end in June 2022. They also suggest offering applicants with greater guidance on energy labels, and increasing the maximum benefit amount so they can purchase energy-saving appliances and save on electric bills.

The government should also work with charities and welfare groups across Hong Kong to offer more communal spaces and shared electrical appliances, such as washing machines, cooking equipment and such. Businesses can also make good use of their resources to help improve the living conditions in subdivided flats. For instance, Oxfam Hong Kong worked with a self-storage company to allow subdivided flat residents to temporarily place their items in storage units, thereby increasing the amount of space in their flats and improving their living conditions.

According to surveyors’ estimates, a 20,000-square-foot site could translate into about 288 flats in which 462 people could live. If the 70 idle sites were developed into transitional housing, the government could build over 20,000 flats. As the supply of these flats increase, there would be increased competition in the property market, which would pressure landlords of subdivided flats to reduce rent or improve living conditions to attract renters.

About Oxfam Hong Kong
Oxfam is a global organisation committed to creating a world without poverty through its advocacy, development and humanitarian work.


About Rethink Poverty
Oxfam Hong Kong is inviting the public to rethink poverty on 17 October – the International Day for the Eradication of Poverty – and beyond, and to fight it together. Oxfam Hong Kong has put together an audio story series with StoryTeller to show the many faces of poverty, encourage all to look at poverty from a different angle and join us in creating a world without poverty. Throughout the Rethink Poverty campaign, Oxfam Hong Kong will share the day-to-day challenges of those who experience poverty, and will hold events that help the public see their communities in a new way.
Website: https://bit.ly/Oxfam_RethinkPoverty

Ms. Wong's family of three live in a subdivided flat that is under 100 square feet in Kwai Chung. The washroom was illegally built by the owner, and the ‘ceiling’ is just a metal sheet. During typhoons and rainstorms, there are serious leaks from the ceiling, so Ms. Wong and her children need to use an umbrella whenever they use the washroom.

The toilet was illegally built by the owner, and the ‘ceiling’ is just a metal sheet, so it always leaks when it rains.

The washroom is very narrow and only fits one person.

In addition to the leaky ceiling, water also seeps through the cracks in the walls.

This subdivided flat is under 100 square feet. Residents here rely on their only fan during the summer as their exhaust fan is broken and it is too expensive to turn on the air conditioner.

In order to save on electric bills, Ms. Wong rarely turns on the air conditioner. She and her youngest son sleep on the bottom bunk, and rely on this fan to stay cool as they sleep.

Lan and her family live in a makeshift flat on the roof of a building. Rainwater drips from their water damaged ceiling panels from time to time, so she bought hard plastic sheets to cover the ceiling.

The ceiling above Lan’s living room has also been damaged by water. During a recent typhoon, Lan and her children had to take shelter at a friend’s flat because all of her ceiling panels were leaking.

When she returned home, Lan found that the darkened area was filled with water and was bulging.

The stagnant water has left Lan’s ceiling moldy. Debris constantly falls from the ceiling, so she has to clean her flat frequently. Her moldy ceiling panels have also left Lan with a respiratory allergy. Lan recently bought more hard plastic sheets so she can cover the ceiling in the hallway too.

The asbestos tiles outside her flat are cracking and falling apart; as a result, they have been releasing toxic dust. Despite living in the flat for five years, Lan did not find out about this problem until a few months ago, so she stopped opening the windows and only dries wet laundry indoors.

Lan recently applied for transitional housing. She hopes her application is accepted so she can leave her rooftop flat.

Ha Jeh, 74, works as a dishwasher and lives with her husband. They live in an old tenement house in Sham Shui Po and share a communal kitchen and toilet with four other households.

Since her husband often brings items he finds homes and is unwilling to throw them away, their flat is cluttered. Their belongings even cover their air conditioner, so her flat does not cool down even when it is turned on. That is why Ha Jeh relies on her electric fans to keep her cool.

Ha Jeh said that because her flat has windows, it is cooler than other subdivided flats that do not have any.

Ha Jeh rarely stays at home during the summer. She usually goes somewhere nearby where there is air conditioning, and takes showers to stay clean and cool.

With the amount of clutter in her flat that blocks even the air conditioner, Ha Jeh can only rely on the electric fans in her flat to stay cool. On the hottest days, Ha Jeh stays at a friend’s place to escape the heat.

Ha Jeh’s air conditioner cannot be seen because of the clutter. 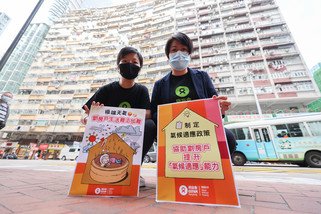 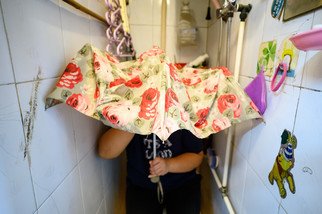 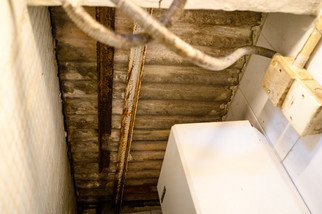 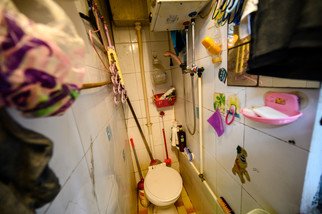 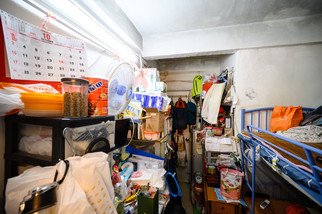 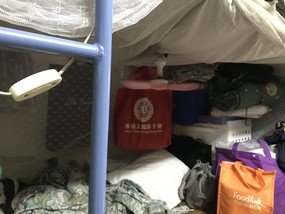 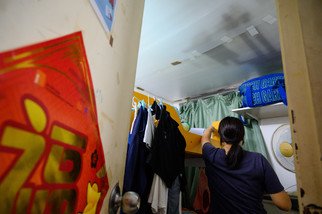 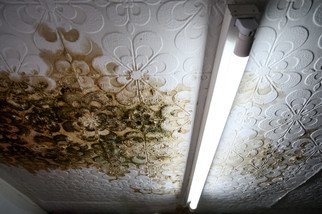 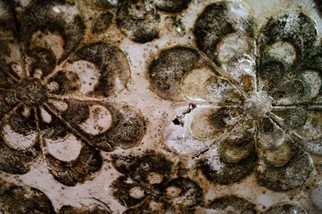 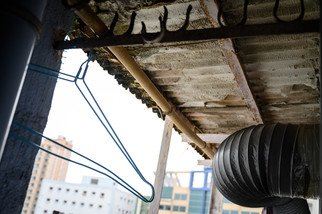 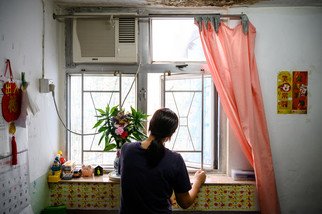 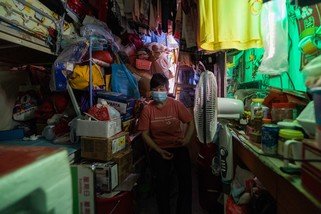 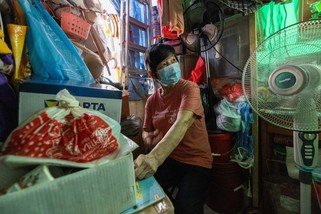 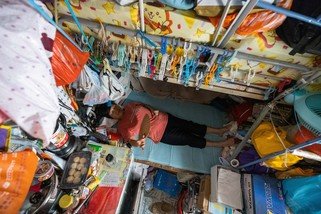 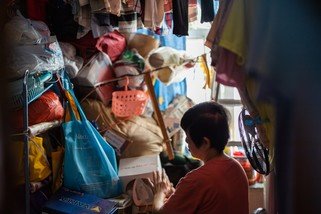 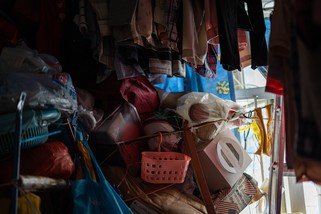