Employment Situation Amidst the Epidemic

As the coronavirus pandemic continues to spread, Hong Kong’s economy has taken a blow – many businesses are laying staff off or closing down. To understand the impact this has on people from low-income households, Oxfam Hong Kong, Agape Community Care Centre of Kwun Tong Methodist Social Service, Concerning CSSA and Low Income Alliance and Hong Kong People Service Centre conducted the ‘Survey on low-income families’ employment situation amidst the epidemic’. Between 16 and 22 March, we conducted telephone interviews with 364 families that either lived in a subdivided flat, or earned a monthly income that was less than 70 per cent of the Hong Kong median income. The results of the survey, which were announced on 26 March, include the following:

To relieve the difficulties low-income families are experiencing, we urge the Government to: 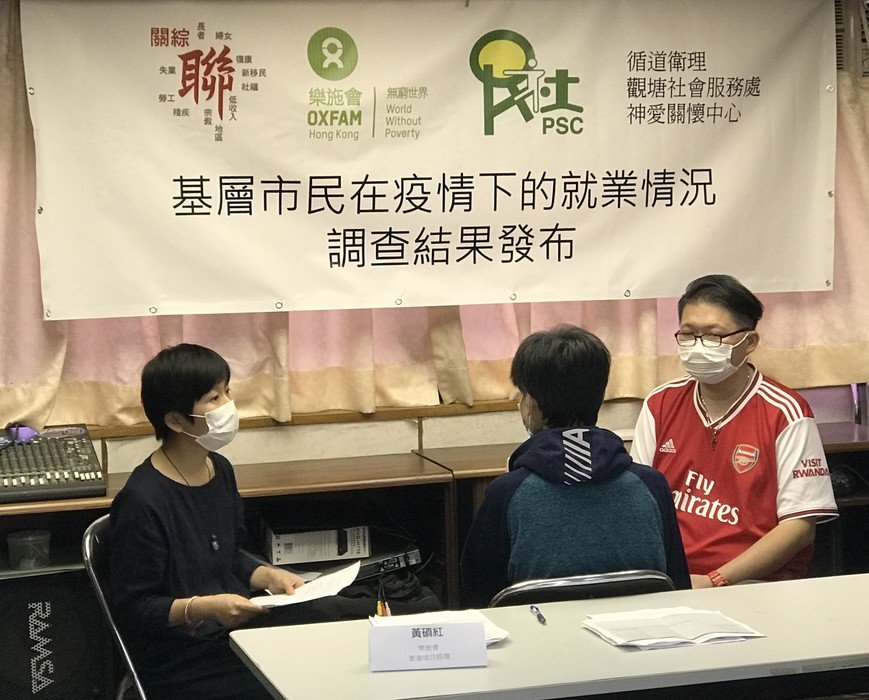 ‘The past few nights, I’ve been walking around until 2 am to find a “good” spot for myself where I can live after I become homeless.’

Mr. Chan (pseudonym), almost 50, recently lost his job after working in the food and beverage industry for years.

Mr. Chan, almost 50, has worked in the food and beverage industry for years. Last October, he was laid off from his job at a restaurant because business was bad. He then found a part-time job at a cha chaan teng, but again was laid off in mid-February, but this time without notice. Since then, he’s applied to over 10 jobs at other restaurants, retail stores, coffee shops, supermarkets and such, but hasn’t had any success. ‘They either say they have enough staff or they’re laying people off,’ Chan said.

Despite working hard, he wasn’t able to earn or save much, and after being laid off, he used up the little he could save. He has never applied for financial assistance – he didn’t even apply for the HK$4,000 handout in 2019 because he felt the amount he was earning at the time (roughly HK$10,000 a month) was still enough to help him get by. Even at the time of this interview, he said he wanted to find a job as soon as possible so that he could support himself without the help of any kind of subsidy. ‘As long as I’m physically and mentally able, I’d like to pull myself up by my bootstraps,’ he said.

At the time of the interview, Mr. Chan was renting a bedspace apartment; he couldn’t cook there and didn’t even have his own kettle – he had to share one with over a dozen people. After losing his job, he said he lived off of HK$7 cup noodles, and bread he bought at a discount. ‘Before I lost my job, I could still afford two to three meals a week that had rice and vegetables. I haven’t had rice in a while though,’ he shared. Now that those meals have become a luxury, and he can’t afford to rent the HK$2,200 room he used to live in, he’s bracing himself for the worst – he’s pretty sure his landlord is going to ask him to leave and he’ll be homeless by April.

With few days left before he knew he was going to have sleep on the streets, he spent a few nights walking around Salisbury Road and Avenue of Stars until 2 am. Why? To look for a ‘good’ spot where he can live after he gets kicked out. While walking around the area, he noticed over a dozen homeless people who, by his estimation, were also forced to live on the streets because of circumstances like his.

LEARN MORE ABOUT HOW WE'RE RESPONDING