Women not only account for the majority of the population in mainland China that lives in poverty, but statistics also show an upward trend. Gender inequality and gender-based violence remains widespread, which highlights the vulnerability of women and other disadvantaged groups during this period of social transformation in mainland China. Through a comprehensive approach, direct services, community develop, public education, policy advocacy and other initiatives, Oxfam has been standing against gender-based violence, empowering women, raising awareness about gender equality and fighting for gender justice.

Courageously fighting against domestic violence from participant to leader 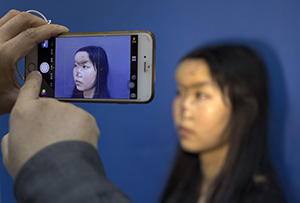 ‘I used to think there wasn’t much hope left in life. It was your support, though, that gave me the courage to fight against domestic violence,’ said Xiao Yun in gratitude to everyone who’s ever supported her.

Soon after she married when she was 20, the abuse began. After 10 years of violence, she couldn’t take it any longer and decided to divorce her then-husband and move away to find work. When she returned once to sort out parenting arrangements for their three children, she refused her ex-husband’s request to remarry. He then – in the presence of her parents and their children – bit off her nose.

Oxfam supported Beijing Yuan Zhong Gender Development Center to implement the ‘Legal Service and Advocacy on Gender-based Violence Elimination’ project, which has provided Xiao with financial and legal support. After the trial, her ex-husband was sentenced to six years of imprisonment for intentional injury.

Upon hearing this, Xiao said, ‘I want the sentence to be reviewed – it’s too light. He’s done more than just bite off my nose – he’s damaged me and my children for life, especially my children.’

Xiao’s lawyer believes that this is a very severe case but the court hadn’t considered the devastating impact domestic violence has had on Xiao or her children. They’re now appealing against the sentence.

‘He’s the very definition of domestic violence, whether towards me or my children,’ Xiao said. ‘I think the court ruled in favour of that criminal. They didn’t put themselves in my shoes to understand how I felt. The law should punish men like [my exhusband] as a warning to others and so that the women who are quietly suffering from domestic violence can be freed from it as soon as possible.’

For many years, we at Oxfam have supported various organisations that promote the enactment of anti-domestic violence laws. We’re also providing those affected by domestic violence with different kinds of services, like counselling, legal aid and emergency support.