With infrastructure damaged, survivors were unable to go back to farming their land and earning an income. In response, Oxfam offered cash-for-work programmes to over 20,000 people affected to rebuild the crumbling infrastructure. Bimala (pictured), 27, was involved in rebuilding irrigation channels for hillside fields under our cash-for-work project.  (Photo: Kieran Doherty / Oxfam)

On 25 April 2015, a massive 7.6 magnitude earthquake struck Nepal that left nearly 9,000 people dead, and destroyed or damaged more than 850,000 homes. Further devastation was caused by hundreds of aftershocks; the earthquake not only brought with it physical destruction, but also severely impacted the economy and employment. Women, children, the elderly, people living with disabilities and those belonging to ‘lower castes’ have all been disproportionately affected.

Thoughts from the Frontlines

Kate joined Oxfam Hong Kong in 2013 as humanitarian and disaster risk management programme officer. Her work has put her in touch with a lot of disasters and emergencies. What has impressed her most is the power of people, and the fact that those in disasters are able to say: “We are homeless, but not helpless.”

Oxfam immediately responded by providing lifesaving relief including emergency food items, drinking water and by setting up temporary shelters. In some of the worst-hit districts and temporary camps, our technical experts constructed water tanks, latrines and sanitation facilities to prevent the outbreak of waterborne diseases. We also distributed rice seeds and agricultural tools to farmers so they could recover their means of living.

The earthquake exacerbated the problem of land ownership because many survivors lost their land certificates or identification. Some women also failed to obtain government-sponsored assistance because they could not prove their land ownership as most of the men – who are officially the land owners – work abroad. Because of this, these women are often unable to receive assistance from the government. That is why, Oxfam has been working the Nepalese government to reissue citizenship certificates and replace their identity cards, and ensure survivors – most of whom are women – to obtain social security documents.

To enable survivors to rebuild their livelihoods and communities sooner, we worked with partner organisations to offer cash-for-work projects. Through them, over 20,000 survivors – many of whom are women – cleared debris, rebuilt trails and repaired irrigation systems, and restored community infrastructure. This work not only enabled survivors to earn an income and not fall into poverty, but was also very empowering, especially for women.

In response to the disaster, Oxfam also:

Our response in numbers

Sushila and Deepak collect clean water from an Oxfam tank. The tank supplies ten households in the village of Burunchili, where only 25 of its 200 houses were left standing. Oxfam supplied the village with clean water, toilets and hygiene kits. (Photo: Sam Tarling/Oxfam)

Deepak is happy to have access to a proper toilet, installed by Oxfam in the village of Burunchili. Having a clean toilet, soap and clean water for hand-washing, are crucial to prevent disease, particularly when many people live together after a disaster. (Photo: Sam Tarling/Oxfam)

Radhika works her small field with tools from Oxfam. Radhika, her husband and their five-year-old son lost their house and cattle shed and toilet and now live in a temporary shelter with their in-laws. Oxfam has provided her with farming tools and a hygiene kit.(Photo: Roshani Kapali /Oxfam)

Dil Maya Sunar (pictured second from right) helped clear the debris from a collapsed school block. “We generally work on the farm but this time, the earthquake swept away our land where we would grow corn, and I’ve nothing else to do,” said Dil Maya. She worked for 15 days under Oxfam’s Cash for Work Programme. (Photo: Rakesh Tuladhar/Oxfam)

More than five tonnes of water and sanitation materials have been dispatched from Oxfam’s warehouse in Spain to help those affected in Nepal. (Photo: Pablo Tosco / Oxfam)

Oxfam has begun delivering aid to those affected by the earthquake by providing clean water, toilets and shelter. We have erected a water tank that can hold 11,000 litres of clean drinking water at the Tundikhel camp in Kathmandu. (Photo: Aubrey Wade / Oxfam)

Forty-five-day-old Hari and his family survived the deadly earthquake and are taking shelter in an open-air camp, but they still face many challenges. Oxfam is currently installing hygiene facilities in these camps. (Photo: Aubrey Wade / Oxfam)

With roads and infrastructure badly damaged, it is difficult to obtain clean, potable water. Oxfam has installed a water tank in Tundikhel camp that can hold up to 11,000 litres of drinking water for survivors. (Photo: Pablo Tosco/Oxfam)

Worried about aftershocks, earthquake survivors were forced to sleep out in the open for days. Heavy rain has also made their situation more difficult. (Photo: Aubrey Wade / Oxfam)

Not only have many of Kathmandu’s historic sites been damaged, the nation’s economy has also been greatly affected. (Photo: Shristi Rajbhandari) 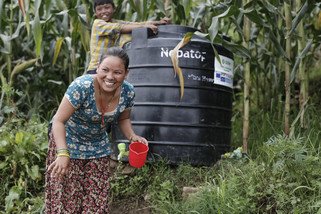 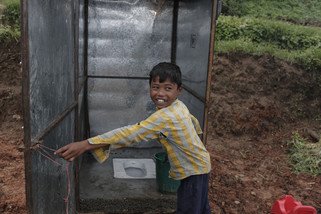 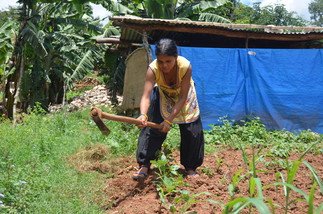 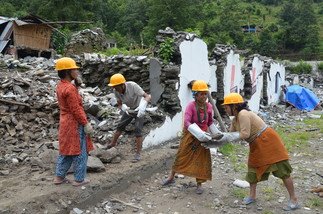 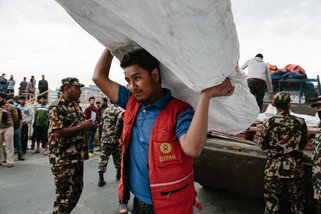 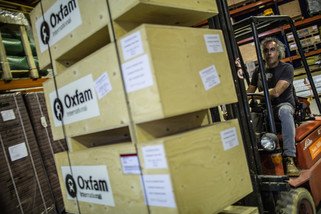 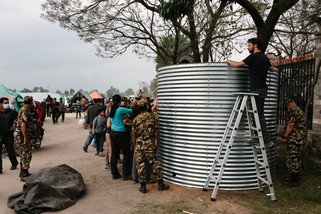 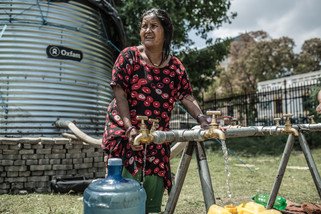 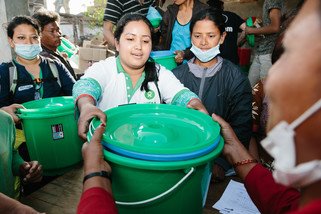 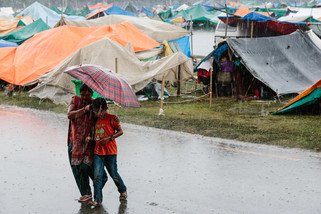 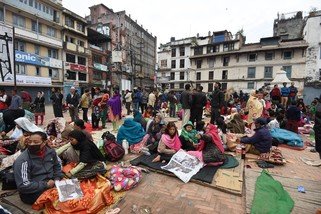 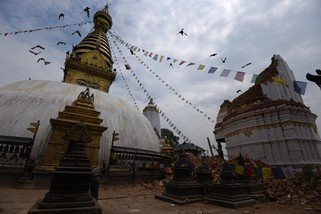 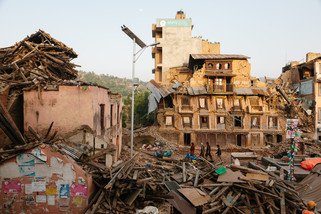