Poverty might look like a full-time job, but one that only pays enough to afford rent for a subdivided flat, but not enough for nutritious food for one’s kids.

Poverty is complex, and manifests itself differently in different cities. Take hunger as an example. In extremely poor places, children do not eat three meals a day. In Hong Kong, children who live in poverty might not necessarily go hungry, but lack nutritious food which impacts their physical development and long-term health.

About Give A Meal 2.0 – Mobile Nutrition Clinic

COVID-19 has badly affected Hong Kong's economy, but families living in poverty are bearing the brunt of its effects. During the severe waves, many workers from low-income households either lost their jobs or were furloughed. They could only cut costs by limiting the food and clothing they buy, but this adversely affects the health and development of their children.

Over the past two years, Oxfam Hong Kong has been implementing Give A Meal – Oxfam’s Food Support Project for Low-Income Families. Within two years, 700 households with children who lived in subdivided flats, as well as elderly people who lived alone received meal kits that met their nutritional needs for six months.

Our partner People Service Centre and the Hong Kong Community Dietitian Association conducted a survey in mid-2021. According to the survey: 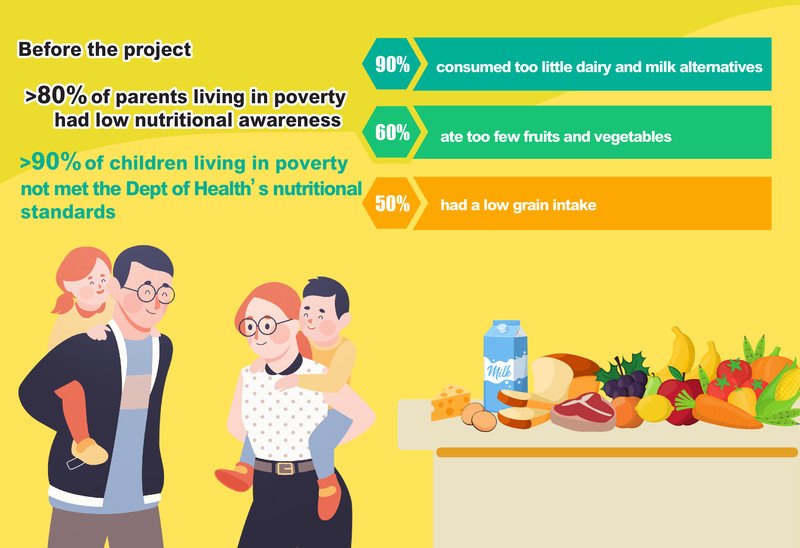 After a year, parents have learnt how to prepare healthy meals for their children and have regained confidence in taking care of their children's meals. Over 70 per cent of the children saw significant improvements in their nutritional intake, and more than half of the children saw improvements in their digestive health and picky eating habits. Oxfam will continue the project this year, hoping to reach more families that live in poverty. 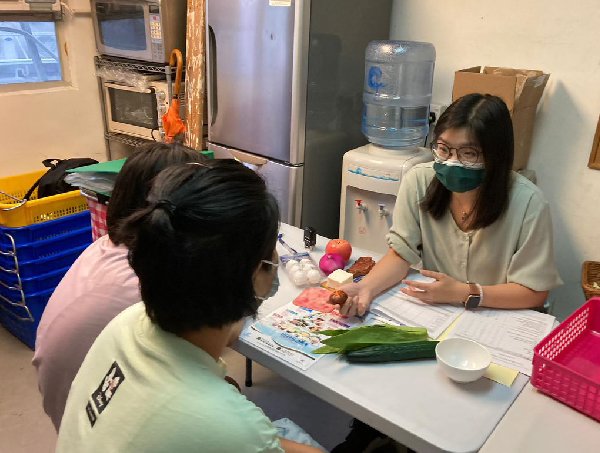 We provide families with at least three one-on-one consultations with nutritionists, and they receive a personalised plan to improve their nutrition. We also collect data about the children’s health, so we can analyse how we can meet the needs of other children in the future through services and policies. 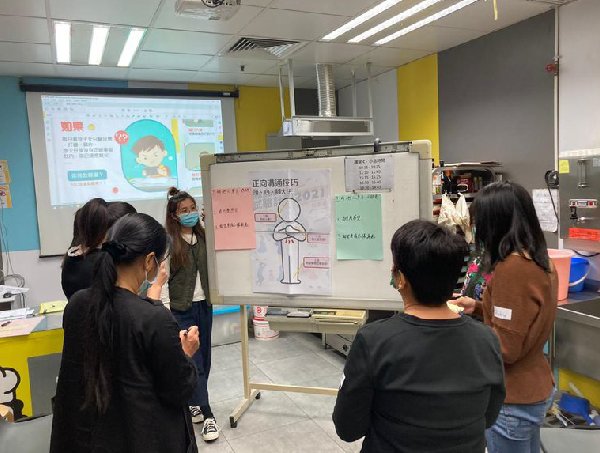 Healthy Eating Support Group for Parents: This group aims to help parents gain a better understanding of nutrition and to learn skills to guide their children to develop healthy eating habits. 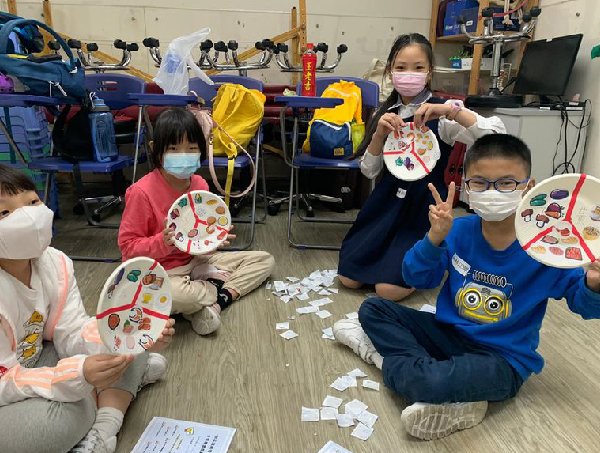 Children's Healthy Eating and Self-Care Group: In addition to learning about healthy eating, children also learn empathy through games and activities, so they understand how their parents feel taking care of the family.

Through research, we learn about the problems children from low-income families face in terms of nutrition and provide actionable plans to help them develop healthy eating habits and reduce the risk of disease.

What Project Participants Are Saying

'my son and I have gained a better understanding of nutrition and have discovered food that is both nutritious and affordable.'

‘With the help and encouragement from the nutritionist, my son and I have gained a better understanding of nutrition and have discovered food that is both nutritious and affordable. My son's belly has not only shrunk, but our relationship has also improved.’ - Cherry, project participant

As a mother, Cherry has always put her children first and would rather spend less on her needs than let her children eat less than enough. She understands how hard it would be to make up for lost nutrition if her 10-year-old son and 6-year-old daughter did not eat well, and how it could affect all aspects of their development. However, money is tight and the cost of food accounts for half of her income. Cherry has limited options when it comes to food, especially affordable and nutritious food. As a result, her son gradually developed picky eating habits and gained weight drastically during the pandemic. Cherry said, ‘There was no use trying to persuade him. My son would just say he doesn't like the food or won't eat it.’

It was not until about six months ago when Cherry and her son joined the Mobile Nutrition Clinic Project that her son gradually adopted a balanced diet. Cherry appreciates the kindness and positivity of the nutritionist, who encouraged and helped her son eat healthily during the one-on-one consultations. ‘When my son made progress, she would praise him; if he didn't reach a goal they had set, she wouldn't scold him but would encourage him instead.’ Cherry said her son saw major improvements in his diet, and in the past six months, his belly had shrunk and he had become slimmer.

What Cherry was most happy about is that after joining the project, her children not only followed the instructions of the nutritionist, but also appreciated her efforts in asking them to eat a balanced diet. After joining the Children's Healthy Eating and Self-Care Group that is part of the project, the siblings have learnt not only learnt about nutrition, but also the hardships their mother experience taking care of the family.

Cherry will never forget the time when she overcooked some noodles, and her son asked tactfully, ‘There's something different about the noodles today. Did you buy a different brand, Mum?’ In the past, he would have refused to eat and it would have turned into an argument. After she admitted her mistake though, her daughter rushed to reassure her, ‘No Mum, it's delicious!’ Cherry was delighted that even though the food did not taste good, her children were willing to eat it and appreciated her effort. She told us, ‘Your relationship with your children is the foundation of everything. If you have a good relationship with them, your kids will eat anything you cook; but if you don't, they will not eat a single bite.’ To her, learning more about healthy eating and strengthening her bond with her children have been the greatest gifts she’s received through the project. 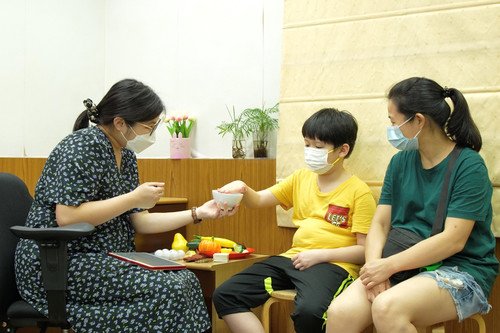 Before joining the project, Cherry tried looking for recipes online but did not know whether or not they were nutritious. Through the project's one-on-one consultations, the nutritionist was able to tailor-make a nutritional improvement plan to suit her son's needs. 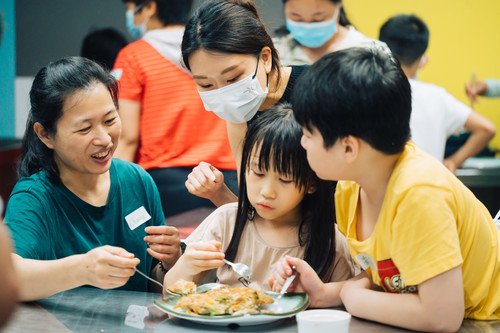 Cherry and her children attended two parent-child cooking classes. Even though the children did not like the ingredients, they found the food they cooked particularly tasty. Her daughter, for example, does not usually eat carrots, but she did not pick them out of the dish and even enjoyed eating them.

Listen to a story to learn more about the challenges low-income families face.

‘Rethink Poverty’ Audio Stories: Commercial Radio DJ Amber Au has always been passionate about social issues. In this audio story, she helps listeners learn more about a father who is trying to help his young son – a picky eater – improve his health. What helps in the end may surprise you.

Build a better and healthier future for the next generation with Oxfam Hong Kong!

Your support will allow us to continue to work with families living in poverty to improve their health!