The government announced that it would set Hong Kong’s first-ever poverty line (the 2012 official poverty line) at half the median household income using the concept of relative poverty at the Poverty Summit in September 2013. As a first step in setting a poverty line, this method was easy to understand and therefore considered acceptable. However, this method did not take into account people’s real-life day-to-day needs. For this reason, Oxfam considered the method that the United States used when setting its own poverty line, and from October 2013 to February 2014, conducted this study on the basic cost of living and the poverty line. By finding out how much money different demographic groups would need to purchase ingredients for nutritionally balanced meals, this study estimated the basic cost of living for households of different sizes. With this information, a comparison with the 2013 poverty line was conducted.

Three steps were involved in the study:
(a) Nutritionally balanced menus for people of different ages were designed through consultations with registered nutritionists, questionnaire surveys and small-group interviews.
(b) The lowest average prices available for the foods in these menus were determined.
(c) Based on information from the Census and Statistics Department, the overall basic cost of living for households of different sizes was determined, and based on these figures, a poverty line – which is the subject of this study – was created.

The study indicates that it costs HK$1,102 to provide children aged two to 12 with nutritionally balanced meals. For people aged 12 to 60, it would cost HK$1,632, and for those aged 60 and above, HK$1,025. Using these figures, the study determined how much households of different sizes would need per month to maintain a nutritional diet, with the results as follows:

There are likely two reasons for the bigger difference between the threshold from this study and the 2013 poverty line for one-person households. First, the poverty line is based on income. Many one- and two-person households comprise elderly people who do not have incomes. As a result, it is likely that the median income for these two household sizes has been underestimated. Second, those living in one-person households cannot share their major living expenses, including food and rent, with anyone else, so these costs will be higher per capita than in larger households.

Oxfam hopes that the poverty threshold calculated using the basic cost of living can be used as an additional tool of measure, to act as a point of comparison for the official poverty line and compensate for where it is lacking. Oxfam hopes this will help the government measure and determine the characteristics of the poor population more accurately, so that it can put forward appropriate alleviation measures and tackle poverty more effectively in the long term.

From left: Oxfam Acting Hong Kong Programme Manager Alfred Choy, Oxfam Director General Stephen Fisher, and Oxfam Hong Kong Programme Senior Manager Kalina Tsang announce the results of an Oxfam study today. The study looks at the basic cost of living and the poverty line in Hong Kong, and also considers the idea of a poverty line based on the basic cost of living. Oxfam hopes that these will assist the government in assessing the number of poor people more accurately, leading them to put forward policies that are more appropriate for the alleviation of poverty.

Oxfam Director General Stephen Fisher says the poverty line designed by Oxfam, which is based on the basic cost of living, provides a more accurate picture of the pressures that one- and two-person households must face in meeting their daily living expenses. He hopes that the government will take it into consideration.

Oxfam Hong Kong Programme Senior Manager Kalina Tsang says the minimum wage must be enough to allow the earner to provide an additional household member who is not employed with basic necessities. Therefore, it should not fall below HK$9,083, the threshold devised for a two-person household based on the basic cost of living.

Oxfam Acting Hong Kong Programme Manager Alfred Choy says the study found a larger discrepancy between the 2013 poverty line and the poverty line based on the basic cost of living for one-person households. The reason is that one- and two-person households include many elderly people who do not have an income. This would lead to a much lower median income. 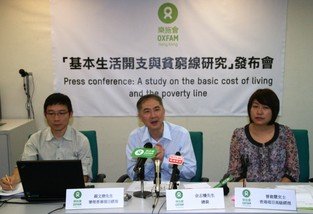 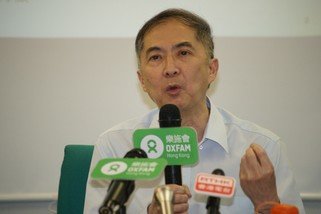 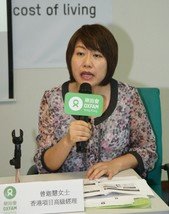