A bullet grazed 11-year-old Sara’s* (right) skull when she fled from Syria to Jordan with her family. She now lives in Zarqa, in Jordan. *Some names have been changed (Photo: Sam Tarling / Oxfam)

Years of brutal fighting have devastated Syria, a country that was a thriving, middle-income country before the start of the conflict in 2011. Over 400,000 people have lost their lives as a result of the conflict. In the past few years, in Syria, Jordan, and Lebanon, we have been helping more than 2 million people with life-saving clean water, sanitation, and vital support for families who have lost everything. Oxfam Hong Kong allocated HK$2.76 million between December 2013 and September 2017 to respond to this emergency.

Oxfam’s response programme has been implemented by Oxfam Great Britain. The programme countries include Lebanon, Jordan and Syria.

The impact of the wider Syria crisis in Lebanon has been massive - a 30% population increase means every area of life is under pressure, with schools, hospitals, housing and businesses all struggling to cope. We work both directly with refugees themselves, and with communities hosting refugees to address common challenges such as water and jobs. We are helping families get the information they need about their legal and human rights and connecting them to medical, legal and support services.

Oxfam has reached more than 250,000 vulnerable people in Lebanon. Our response has included:

Oxfam is working in Za’atari refugee camp, Jordan's fourth largest 'city', to address water needs among other things. We help nearly 25,000 camp residents, and work with partners on constructing a water network throughout the camp that can address the needs of all 80,000 people who live there.

Oxfam works in three of Za'atari's 12 districts, supervising water and sanitation, refuse management and the cleaning and maintenance of water, hygiene and sanitation blocks, we also co-ordinate hygiene promotion activities.

From waste to work: Recycling in Za'atari refugee camp

In Za'atari refugee camp, Oxfam has completed construction of drinking water network and waste water network. Besides, private household toilets were constructed for the most vulnerable households.

In host communities Oxfam is still providing humanitarian assistance to vulnerable refugees and Jordanians, and at the same time working on more long term development issues such as water governance, economic opportunities and gender equality. During 2017 Oxfam has provided humanitarian assistance to 5,913 families, who have received support in terms of winterization kits that allow vulnerable families to protect themselves from the harsh winters, protection services, cash assistance, and the rehabilitation of household water and sanitation facilities.

Oxfam Great Britain has had an office inside Syria since July 2013, responding alongside other agencies to the urgent need for clean water. An estimated 35% of water treatment plants in Syria have been damaged during the conflict and there are concerns over water contamination.

We have been working primarily to make sure people have enough clean water, and are able to keep themselves clean and healthy. The Suleiman Al-Halabi water pumping station is the main water source for Aleppo city, and we are committed to keeping the generator, which we previously installed, operational. Water pumped from here reaches people across conflict lines. Besides, we installed a second huge generator in Aleppo to increase the capacity of water delivered to the population of around 1.5 million people.

In Hama, the equipping of the Lwebde pumping station has been completed, facilitating the supply of clean water to 133,000 conflict affected people. The security situation continues to make operations very challenging.

Campaigning for a political solution to the conflict

Providing life-saving support to the millions of people affected by this devastating conflict is essential but it is not enough. We have been campaigning and advocating for an end to the fighting, and a sustainable and inclusive political solution since the beginning of the crisis.

We will continue to call on all parties to the conflict to stop any arms transfers and guarantee humanitarian access and protection of civilians, whether inside Syria or in neighbouring countries.

We are also calling for rich states to commit to fully funding Syria crisis response appeal and to resettle 10 per cent of all registered Syrian refugees.

In the face of this darkness ordinary Syrians are committing unseen acts of heroism every day. Inspired by their courage, we joined hands #WithSyria with over 130 organisations and individuals on the movement, and we do all we can to help end the suffering and turn the lights back on.

Mohammad, 66, sits in front of his home in Eastern Ghouta. He and his family survived the 5-year battle but now face threats of a different kind. The war-damaged water infrastructure. lack of maintenance and limited power supply have hindered people's access to drinking water. By rehabilitating three wells in different locations in Eastern Ghouta, Oxfam has helped provide people like Mohammad with clean and safe water. (Photo: Dania Kareh / Oxfam)

Over 6 million people are internally displaced

Wadha, who lives in Deir Ez-Zor, is one of many people benefiting from Oxfam’s cash-for-work intervention. It helps Syrians get back on their feet and provide for their families. (Photo: Dania Kareh / Oxfam)

4 in 5 Syrians are living in poverty

Nouf, 44, fled her home in rural Aleppo’s Huajjeneh during the fighting. Although the mother of 7 has recently returned with her family, she faces many challenges ahead. Oxfam has provided 250 vulnerable families in rural Aleppo with chickens and chicken feed to help them make a living. The eggs produced provide a source of both food and income. (Photo: Dania Kareh / Oxfam)

Over one-third schools were damaged

In 2018, Oxfam rehabilitated the water networks and toilets of 16 schools in Damascus, providing children with access to safe, clean water, and reducing public health risks associated with poor sanitation and water-borne diseases. “I always avoided using the toilets at school. They used to be smelly and always wet, but not anymore,’’ Noura, 7, tells Oxfam. (Photo: Dania Kareh / Oxfam)

In 2017 Oxfam carried out a hygiene promotion campaign in 65 schools in Damascus, benefiting about 13,522 boys and girls also aged between 10-12. Ramia, 10, took part in an interactive play initiative to understood the importance of water conservation and how to maintain good hygiene.

The boys and girls performed songs and took part in educational interactive games focusing on the importance of using soap for handwashing, as well as the right way to wash hands. (Photo: Islam Mardini/Oxfam)

Sana, an Oxfam volunteer in Aleppo, shows children from Aleppo how to wash their hands properly. (Photo: Islam Mardini/Oxfam)

The Recycling Project Centre in Zaatari Refugee Camp. Oxfam introduced a solid waste management and recycling project in three of the camp’s 12 districts. The project, which was well-received by Zaatari residents, is being scaled up and will be introduced in all districts of the camp. Syrian refugees working in the recycling centre. They work seven hours a day for a wage of seven Jordanian Dinars. The workers are separating different materials at the centre. (Photo: Poon Wai Nang/Oxfam)

A bullet grazed 11-year-old Sara’s* skull when she fled from Syria to Jordan with her family. She now lives in Zarqa, in Jordan. Sara said, ‘I want to become a doctor and run a clinic, so I can help people in need. Once, I talked to my friends at school about becoming a doctor; I think it’s a good job because doctors can help others.’ *Some names have been changed (Photo: Poon Wai Nang/Oxfam) 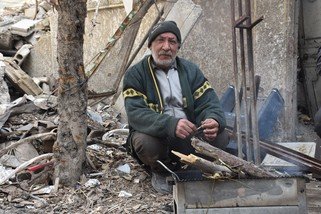 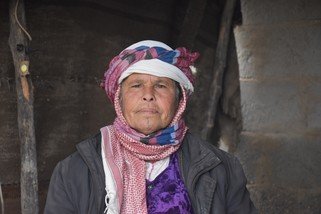 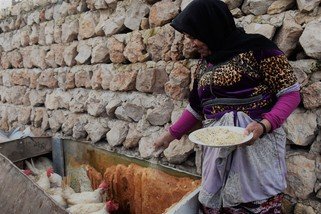 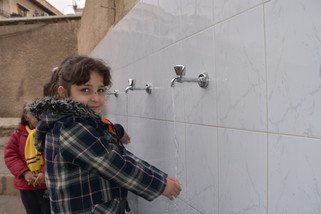 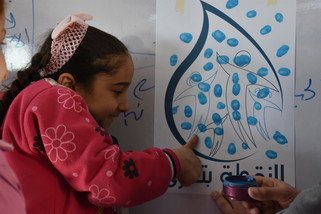 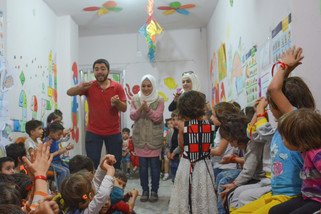 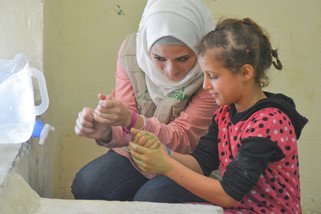 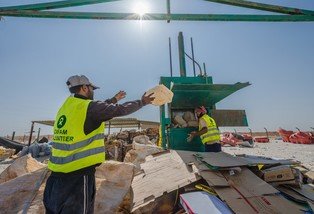 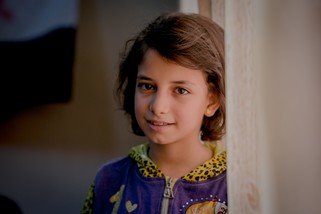