The ‘Hong Kong Inequality Report’, which was released today by Oxfam, revealed that poverty has worsened over the last 15 years: the richest now earn 44 times more than poorest and according to the latest statistics, there are over 1.3 million people living in poverty. Oxfam thus urges the government to make poverty alleviation and reducing inequality in Hong Kong a top priority in the upcoming policy address. The agency also called on the government to make progressive policy changes to address the problem, build a human economy and reduce inequality by increasing recurrent expenditure by HK$36.7 billion, which should be spent on public services to benefit citizens, and to improve labour protection and benefits.

The report examines data from the Census and Statistics Department's 2001-2016 Population Census, the Mid-term Population Census and related data, and shows that inequality is in large part to blame for worsening poverty. With Hong Kong’s Gini coefficient (based on original monthly household income) at 0.539 – the highest in 45 years; and the Gini coefficient based on post-tax post-social transfer monthly household income was 0.473 in 2016 – the wealth gap is one of the most extreme among developed economies, including the Canada - 0.318, United Kingdom - 0.351, United States - 0.391, Singapore - 0.356 and Australia - 0.337.

In 2016, the median monthly household income of the top decile was 44 times that of the lowest decile, which is an increase from 34 times in 2006. In other words, in 2006 the lowest decile needed to work two years and ten months to earn what the richest make in a month; according to the latest statistics, it now takes three years and eight months. Moreover, between 2006 and 2016, the median monthly household income of the lowest decile had only increased by 14 per cent, while that of the richest 10 per cent increased by 47 per cent.

The poor population has also continued to grow. In 2016, over 1.3 million people, or 530,000 households, lived in poverty. Of these households, 300,000, or over 920,000 people, were working poor. Amount the poor, over 390,000 were seniors – people aged 65 or above, meaning one in three elderly persons lived in poverty. Further, one in every four children live in poverty, while the poverty rate among South Asians is 23 per cent – much higher than citywide poverty rate of 14.7 per cent.

Not only is the poor population increasing, their living conditions are also worsening. In 2016, a total of 92,700 subdivided flats housed nearly 210,000 residents. Further, the average waiting time for a public rental housing unit increased from 3 years to 5.3 years. At the same time, about 40 per cent of working poor households earned even less than what they would receive from the CSSA scheme. The number of people engaged in casual work in the private sector was 149,800 in 2016, showing a 16.4 per cent increase from 2001.

Despite worsening poverty over the past 10 years, the Hong Kong government has accumulated more than HK$690 billion in surplus, meaning total fiscal reserves have surpassed the HK$1.1 trillion mark. However, its recurrent expenditure as a share of GDP in 2017-18 was 14.4 per cent – lower than 15.7 per cent during SARS in 2003. Even worse, the government spends fewer proportions on healthcare and social welfare, which are crucial basic services to the poor, compared to other OECD members such as Japan, South Korea, the United Kingdom, Canada, Sweden, and New Zealand. The decline in expenditure proportions on low-income citizens means existing services are unable to cater to the needs of community, leaving many below the poverty line.

Wong Shek Hung, Hong Kong Programme Manager at Oxfam said: ‘Oxfam is appalled at the disparity between the rich and poor in Hong Kong. Despite Hong Kong’s growing poor population, fiscal reserves have set a record high while public expenditure has been minimal. The government must improve its policies and increase public spending to improve public services that benefit the poorest and society at large.’

The additional recurrent expenditure can be spent on: 1) increasing the quota for occasional child care services, to alleviate the current situation as only one in 148 children have access to government child care services; 2) increasing Care-and-Attention places and Nursing Home places for the elderly; 3) increasing the Old Age Living Allowance; 4) providing Chinese language learning support to ethnic minority pre-school, primary and secondary school students; and 5) implementing policies that facilitate the development of local bazaars; 6) interim social housing, increasing the supply of public housing by speeding up the planning process and increasing the public housing ratio via community planning.

Secondly, the government should improve labour protection and benefits, to ensure people who work can provide for themselves and their families, and live with dignity. As such, Oxfam urges the government to review minimum wage annually. Also, the government as the biggest employer, should conduct a full review on the outsourcing system, pay outsourced employees a living wage, and encourage the business sector to follow suit. Furthermore, the government should amend the Employment Ordinance so that casual workers who work 72 hours a month are also protected.

In the long run, the government should review the current taxation scheme and implement ability-to-pay taxation in order to better redistribute resources, narrow the gap between rich and poor, and create a more equitable society.

‘Extreme wealth disparity greatly hinders social development, and has left many trapped in poverty despite their hard work. It is clear that current policies are doing nothing to reverse inequality. The findings show that trickledown economics has proven ineffective as the poor lack upward social mobility. That’s why we at Oxfam are urging the government to redistribute resources as it should, substantially increase recurrent expenditure on public services and formulate policies that benefit the poor. In the long-run, the government should support the UN's Sustainable Development Goals, and focus particularly on Goal 10: Reduced Inequalities, to create a fairer Hong Kong society by 2030.’ said Kalina Tsang, Head of Oxfam’s Hong Kong, Macau, Taiwan Programme.

Oxfam’s campaign ‘Fair the Sheep: Advocacy and Public Education Activities’ runs between 17 September and 17 October, the International Day for the Eradication of Poverty. Through a series of talks, community visits and publication, Oxfam hopes to raise public awareness about inequality in Hong Kong, and is inviting the public to sign a petition to urge the government to respond to the people's voice in the policy address and the budget.

Oxfam is a worldwide development organisation that mobilises the power of people against poverty.

Oxfam’s campaign ‘Fair the Sheep: Advocacy and Public Education Activities’ runs between 17 September and 17 October, the International Day for the Eradication of Poverty. Fair the Sheep is a character whose name is a play on the Chinese saying ‘公平咩?’ (gung1 ping4 me1), which questions inequality. Throughout the campaign, Fair will walk through communities to raise awareness about inequality. 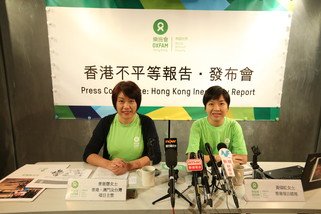 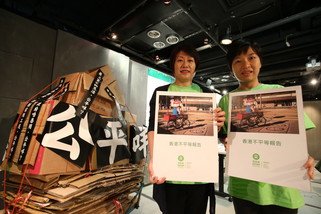 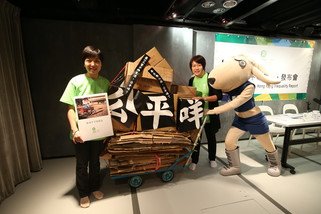 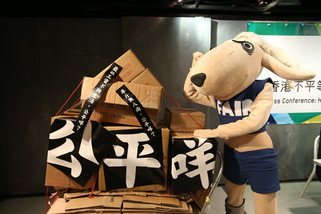