Trends among the Working Poor

The policies and measures implemented by the Government over the years have proven to be inadequate in solving the problems of working poverty and unable to provide meaningful support to working poor households with children. Therefore, Oxfam recommends that in addition to reviewing the minimum wage level annually, the Government should also implement a Low Income Family Subsidy to ensure that working poor households with dependent children will be able to maintain basic standards of living without having to apply for CSSA. This will help to alleviate inter-generational poverty. Our recommendations are as follows:

Target: Poor households with at least one full-time working member and at least one non-working dependent child aged under 18 (including children aged under six and children aged six or above studying at a primary/secondary school) are the targeted beneficiaries. To minimise administrative cost, the database of the Labour Department could be used to select eligible households.

Eligibility: Households with monthly income at or below the poverty line, that is, 50 per cent of the median household income are eligible to apply. To simplify the application procedure, an asset test is not required.

Subsidy amount: Every eligible child can receive a subsidy of HK$800, which is equivalent to 40% of the remaining expenditure of a poor child after deducting total sum of current subsidies (such as the School Textbook Assistance Scheme, Meal Allowance for Children and Subsidy Scheme for Internet Access Charges), and also equivalent to half of the standard rate for children under the CSSA scheme. We initially recommend that the first two children will receive HK$800 each. The subsidy amount for the third and subsequent children will be adjusted according to the decreasing additional costs they bring to the household.

According to the above recommendations, about 180,000 poor children aged under 18 are estimated to benefit from the subsidy. The annual cost for this scheme is approximately HK$1.73 billion.

About Oxfam
Oxfam is dedicated to fighting poverty and inequity worldwide. The international and independent development and humanitarian organisation tackles poverty in four main ways: sustainable development in poor communities, disaster relief, local and global advocacy, and education with Hong Kong youth. Established in Hong Kong in 1976, Oxfam Hong Kong is a founding member of Oxfam, an international confederation that has assisted poor people in 94 countries. Oxfam Hong Kong alone has supported poor people in over 70 countries/regions. 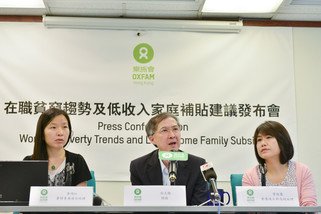