Oxfam announced its Hong Kong Living Wage Report today, which put forth the first local living wage rate: HK$54.7/hour. The agency is now calling on the government and employers who are able to pay their employees a living wage, as the current minimum wage has not been able to keep up with inflation and does not take the basic needs of employees’ families into account.

Oxfam believes that paying a living wage would enable employees and their families to make a reasonable living and secure a decent standard of living, address the problem of working poverty, and close the gap between the rich and poor to create a fairer society.

According to the Global Living Wage Coalition, a living wage is the remuneration received for a standard work week by a worker in a particular place sufficient to afford a decent standard of living for the worker and her or his family. Elements of a decent standard of living include food, water, housing, education, health care, transport, clothing, and other essential needs including provision for unexpected events.

The study was conducted by Oxfam Hong Kong and the Hong Kong Institute of Asia-Pacific Studies’ Centre for Quality of Life at the Chinese University of Hong Kong between November 2017 and February 2018. The aim of the study was to understand working families’ cost of living to calculate a living wage rate.

The study looked at one-person and three-person low-income families and used the 2014/15 Household Expenditure Survey as reference for the survey framework; it focused on four major items: food, housing, other essential expenses and a small margin for unseen events.

The study is based on the actual working hours of a full-time employee and the average working population of a family. The living wage was calculated assuming employees worked 26 days a month and eight hours a day, and was based on the fact that an average three-person working household (one parent with a full-time job, one with a part-time job, and one child in primary/secondary school) has 1.74 full-time workers. Taking these into account and after their basic monthly expenses were converted into an hourly rate, the estimated net living wage was HK$54.7.

Over 1 million workers earn less than a living wage
According to the 2017 Annual Earnings and Hours Survey of the Census and Statistics Department, between May and June 2017, 1.07 million employees (excluding government employees) earned less than a living wage. Nearly 60 per cent (58 per cent) of these employees worked in the import and export, retail, food, property management, security and cleaning industries.

Kalina Tsang, Head of Oxfam’s Hong Kong, Macau, Taiwan Programme,, said: ‘Working poverty has become a serious issue. The reason why life is hard for low-income workers is because minimum wage is only reviewed every two years, and only increases in tiny increments. Not only does it not keep up with inflation, but it also doesn’t guarantee workers and their families their basic needs. The living wage makes up for what the minimum wage lacks as it takes workers and their families’ basic needs into account. And the biggest difference between the two is that employers voluntarily pay the former whereas the latter is regulated by the government. In the long run, we hope minimum wage will be on par with the living wage. The living wage also acts as good reference for the government when they review the minimum wage. We believe paying employees a living wage is part of a company’s corporate social responsibility. The government and companies that are able should therefore take the extra step to make Hong Kong a more equitable society.’

The Living Wage Movement has spread across countries like the UK, Canada, New Zealand and the US in recent years, and governments and companies are supporting the initiative. For instance, the Living Wage Foundation in the UK, which was established in 2011, has accredited nearly 4,800 employers who pay their staff (including directly employed, contract and outsourced employees) a living wage. The UN is also a proponent of this as per Sustainable Development Goal 8: Decent work and economic growth. The goal suggests that decent work should provide workers and their families with a fair income, security in the workplace, better prospects for personal development, etc.

Wong Hung, Associate Professor in the Department of Social Work at the Chinese University of Hong Kong, said: ‘This study is important for the discussion of Hong Kong's poverty alleviation policies and the implementation of a living wage is crucial to solving the problem of working poverty. In fact, everyone who works has the right to just and favourable remuneration that guarantees a decent standard of living for themselves and their families, according to the Universal Declaration of Human Rights.’

Earning a living wage helps low-income workers escape poverty
According to the Poverty Commission's 2017 Hong Kong Poverty Report, the official poverty line for one- and three-person households is HK$4,000 and HK$15,000 respectively. If an employee receives a living wage of HK$54.7/hour, the monthly income of these households would be HK$11,378 and HK$19,798 respectively, which is 1.8 times and 32 per cent higher than the official poverty line respectively. This clearly demonstrates that employees who make a living wage would be able to escape poverty.

Oxfam urges the government and companies to pay employees a living wage – HK$54.7/hr
Oxfam plans to partner with the business sector and NGOs to promote the Living Wage Movement in Hong Kong and establish a foundation that recognises employers who are willing to pay a living wage through an accreditation scheme.|

The organisation believes that as the largest employer, the government – which employs the largest number of outsourced low-income workers – should take the lead in paying a living wage. Employers who are able to pay their employees (including all directly employed, contract and outsourced staff) a living wage should also do so to build a human economy. Doing this would allow the vast majority of Hong Kong and the most vulnerable to enjoy equal opportunities for development, and create a fairer society.

- Ends -
Notes to the editor
About the living wage: As the minimum wage has failed to cover workers’ living costs, various countries/regions launched the Living Wage Movement. A living wage is a wage level that satisfies the basic needs of workers and their families; it should meet their nutritional needs, provide them with a reasonable living space, enable them to lead a normal social life, and help meet their basic educational and medical needs. This was achieved in the UK, for instance, through discussions with unions, human resource consultants and employers who believe workers should earn a living wage. The Living Wage Foundation was then founded in 2011; it established an accreditation system in the UK (in places like Scotland, Northern Ireland and Wales) to continue to promote the living wage.

Oxfam announced its latest report on the living wage. Kalina Tsang, Head of Oxfam’s Hong Kong, Macau, Taiwan Programme, urged the government – which employs the largest number of outsourced low-income workers – to take the lead in paying a living wage.

Oxfam announced its latest report on the living wage. In it, Prof. Wong Hung, Associate Professor, Department of Social Work, CUHK, and his research team found that the basic monthly household expenditure for a one-person family was HK$10,494 to HK$11,548, and HK$19,935 to HK$21,156 for a three-person family. 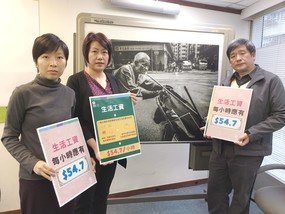 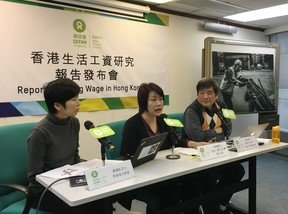 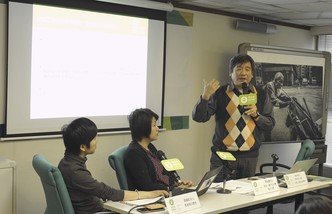 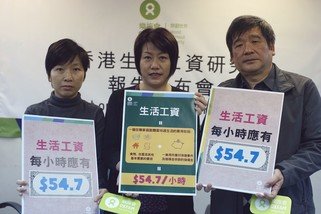