Espoir Mahamba (Right), a public health promotor for Oxfam, speaks to a church congregation about Ebola, precautions to be taken and symptoms to look out for on 19 August 2018 in Mangina. Oxfam is working closely with local leaders and communities to stop the the spread of the virus with community engagement and through sanitation activities. (Photo: John Wessels/Oxfam)

The latest outbreak of Ebola started in Equateur Province in the DRC May 2018. Since then, the economy has been badly hit and those living in poverty have been affected most. The Ebola virus claimed 33 lives, while there were 38 confirmed cases and 16 probable cases. As 42 days (two incubation periods) have passed since the last possible exposure to a confirmed Ebola virus disease case, the government announced the end of the outbreak in the DRC on 24 July 2018.

The quick and well-coordinated response from the health sector, the government, aid agencies and affected communities helped put an end to Ebola in just three months (May to July 2018). The sharing of knowledge has played a huge role in minimising the impact of this outbreak; lessons have clearly been learnt from the West Africa epidemic which claimed so many lives (the death toll reached 11,310). 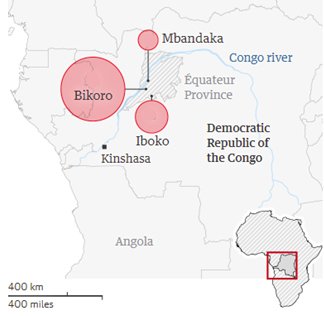 The latest Ebola outbreak spread to Bikoro, Iboko and Mbandaka in Equateur Province in the DRC.

The Congolese government responded to the epidemic between May and July 2018. Since we at Oxfam have long been recognised for our expertise in water, sanitation and hygiene, we co-led this area of the response with UNICEF. As of 25 July 2018, we have reached 96,000 people in six zones, including Bikoro, Iboko and Mbandaka – in which cases have already been recorded – and three other high-risk zones. The key focuses of the response were on public health outreach and community engagement on the risks of Ebola and how to prevent transmission, which proved crucial to mitigating the spread of the disease. So far, we have:

The Ebola outbreak has seriously affected the livelihoods of the locals who live in a country that ranks among the poorest in the world. Oxfam is now planning to work with them to rebuild their livelihoods.

We can't walk away from the people whose lives have been hit hard by the crisis, or forget that the risk of future outbreaks remains high. As the country moves from red-alert to long-term response, some of the world's poorest people have been left even worse off by the fall in trade, farming, and hunting during the outbreak. What Ebola victims need now is support to rebuild their lives – more money, improved community awareness and better health systems would help the DRC fight off the virus now and in the future.

The Ebola case-fatality rate and death rate remain higher than other diseases. The latest outbreak brought a huge threat to the DRC due to the high poverty rate in the country. The DRC still ranks as one of the poorest countries in the world, with 64 per cent of people there living under the poverty line*. Communities often lack clean water and hygiene facilities, as well as knowledge about Ebola prevention, which increases the population’s risk of contracting Ebola.

Local traditional practices also reduce the efficacy of disease control. Jose Barahona, Oxfam DRC Country Director, observed this and said: ‘Most people understand the situation and follow the advice provided; however, some people have doubts and worries about the epidemic. Some people don't believe in the Ebola virus or in the medication provided, others are afraid of it. Cases of people leaving hospitals and refusing care have been reported, which could have dramatic consequences. There are also some traditional practices concerning the handling and burial of dead bodies that can increase the risk of transmission after death.’

That is why Oxfam’s response focused on public health outreach and community engagement on the risks of Ebola and how to prevent transmission, which has proved crucial to mitigating the spread of the disease.

How do you get Ebola?

A volunteer checks the temperature of a woman who is visiting a clinic in DRC. (Photo: Oxfam)

Two women wash their hands with their kids after learning ways to fight against Ebola from Oxfam. (Photo: Oxfam)

Espoir Mahamba (Right), a public health promotor for Oxfam, speaks to a church congregation about Ebola, precautions to be taken and symptoms to look out for on 19 August 2018 in Mangina. Oxfam is working closely with local leaders and communities to stop the the spread of the virus with community engagement and through sanitation activities. (Photo: John Wessels/Oxfam)

This group of women volunteers are putting on a play to increase awareness about the Ebola virus in a church in DRC. (Photo: Oxfam) 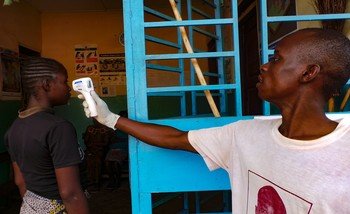 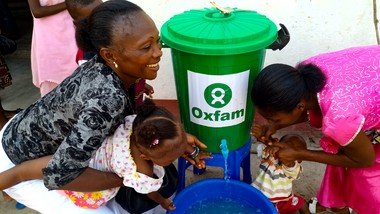 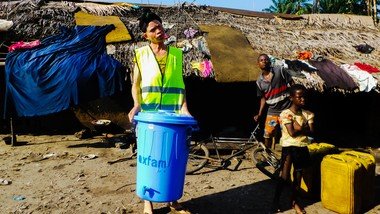 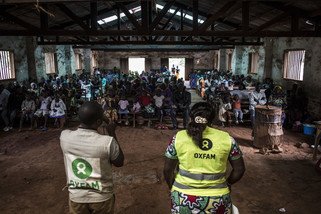 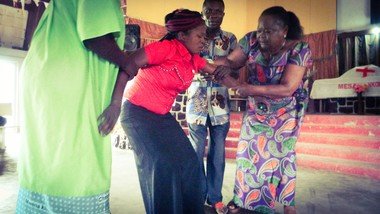