The UN declared a state of famine in Leer and Mayendit counties in South Sudan's Unity State in February 2017, and announced an emergency food situation in Panyijiar in the same month. Besides supplying emergency food and clean water, building latrines and hygiene facilities, providing people with seeds and tools to resume their livelihoods, we at Oxfam are providing cash-for-work opportunities. At Panyijiar County, we're implementing an innovative canoe voucher scheme to help vulnerable people and isolated communities to safely access food and other essential aid. Canoe operators can exchange the vouchers they receive from paasengers for cash from Oxfam.

The United Nations (UN) declared a famine in parts of South Sudan on 20 February 2017. Oxfam Hong Kong is allocating HK$3.2 million to support relief efforts for the people of South Sudan, and calling on the public to donate to save lives.

The situation in South Sudan is dire. With the country’s prolonged conflict, which erupted in December 2013, coupled with crop failure and the rapid increase in food prices, 100,000 people are now facing starvation. Nearly 5 million people – or 40 per cent of the country’s population – are also in urgent need of food and help, especially women and children. An estimated 1.5 million people from South Sudan have also fled to neighbouring countries like Uganda, Ethiopia and Kenya to seek refuge from the conflict.

We have been implementing poverty alleviation projects in South Sudan and neighbouring areas for over 30 years. Over the past year, we have provided food, distributed water and other relief to more than 600,000 people in the country. Humanitarian relief workers are still working in South Sudan, including Unity State where a famine was declared. Oxfam has seven humanitarian bases across the country and our roving Emergency Preparedness & Response team is deployable to run life-saving activities in other locations where the need is greatest. We are:

On the brink of famine: Yemen, Somalia and Nigeria

Besides South Sudan, Yemen, Somalia and Nigeria are also on the brink of famine as some 20 million people are in hunger.

Yemen is on the verge of famine after nearly two years of devastating conflict. A blockade has been imposed on Yemen, preventing food from going into the country. The country’s economy is on the brink of collapse. Food prices are continuing to rise, while many of the poorest people are now unable to afford food.

Drought has caused crops to fail and cattle to die in parts of Somalia, and has led to a severe food shortage. The lack of rainfall has lowered river levels and has left people who rely on agriculture unable to maintain their livelihoods. Food prices are rising rapidly in several areas, and in Somalia, 2.9 million people are facing acute food insecurity that has reached ‘crisis’ and ‘emergency’ levels. This could develop into a famine if the April-June rains fail, people in the country become unable to buy food and they do not receive humanitarian support.

Oxfam has been working with local partners in Somalia for the past 40 years. We recently completed an assessment in Somalia; our response during phase one includes:

In Nigeria, conflict has destroyed people’s livelihoods, especially in the northeastern rural area in Borno State, which has seen inflation rates soar. Over 5 million people are experiencing a food crisis and are cut off from aid, while 4.4 million are in urgent need.

Three key conditions need to be met before a famine is declared: (1)  At least 20 per cent of households need to be facing an extreme shortage in food and have limited ability to cope (i.e. at least one-fifth of the population does not have access to 2,100 calories a day); (2) More than two out of every 10,000 people die each day; (3) Over 30 per cent of the population is seriously malnourished.

A group of elderly women listen to instructions about a food distribution and the possible assistance coming their way in the next few days. Given their age and poor health, family members helped carry them to the registration site. (Photo: Bruno Bierrenbach Feder/Oxfam)

Oxfam has employed boat operators to ferry vulnerable groups of people to and from the islands in order to reach the registration centre, and receive food and relief items. (Photo: Bruno Bierrenbach Feder/Oxfam)

Oxfam constructed a water system with a bore to provide water to the people. (Photo: Bruno Bierrenbach Feder/Oxfam)

Joseph Pur Chuol Oxfam’s community hygiene promoter has been here with his team of four to ensure proper sanitation is maintained to prevent a cholera outbreak. (Photo: Bruno Bierrenbach Feder/Oxfam)

Oxfam provided people with tools and training so that people can start fishing or farming. (Photo: Bruno Bierrenbach Feder/Oxfam)

Oxfam’s staff Kujiek talks to people who are registering for food and relief to understand their needs. (Photo: Bruno Bierrenbach Feder/Oxfam) 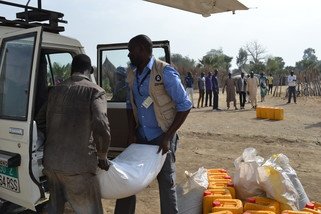 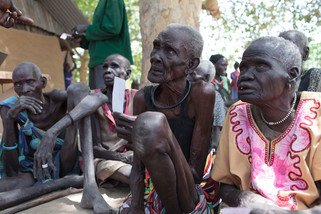 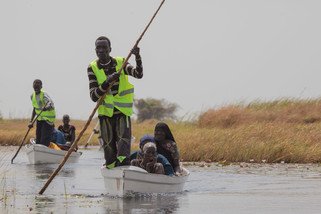 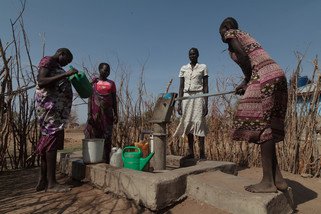 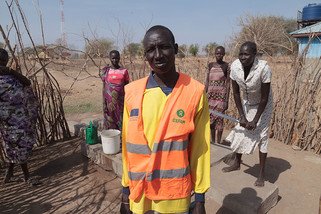 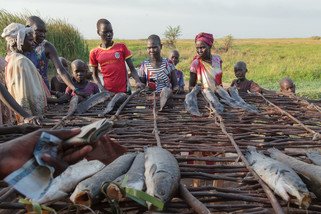 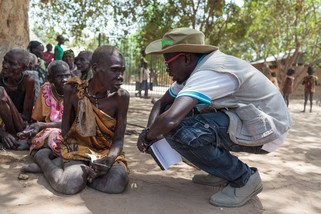