Poverty isn’t just hunger or not having enough money.
Let’s look at the data and let the stats show us what poverty looks like around the world.

Extreme weather exacerbated by climate change has had a major impact on sanitation workers and their working environment. In summer 2021, Oxfam Hong Kong (OHK) commissioned a research team to interview 200 frontline outdoor cleaners, 90 per cent said they had to work in the sun most of the time, while nearly 70 per cent needed to work in the heat all day long. Despite this, employers have yet to provide them with cooling equipment and have failed to comply with the Labour Department’s guidelines on working in hot weather.

Furthermore, according to OHK’s study on sanitation workers working conditions at refuse collection points (RCPs) in summer 2022, the average temperature at RCPs is 32°C, which is even higher than the record-breaking average temperature outdoors (30.3 °C). Moreover, poor ventilation, wet and stifling heat, infestation, stench and the lack of resting space are common problems found in old, newly-built and renovated RCPs. More than 65 per cent of sanitation workers said they always feel unwell when they work at RCPs, more than 75 per cent of interviewees said they could only find cooler areas outside to eat and rest, which has led members of the public to misunderstand and accuse them of being lazy, which also put them in the risk of being reported and lost their job.

The government's current measures to tackle climate change focus on emissions reductions, but what is urgently needed are climate adaptation measures related to the most vulnerable people so they can adapt to it now. That is why OHK is distributing portable neck/waist fans to 4,000 sanitation workers. This will be done to enhance their ability to adapt to climate change and reduce their risk of suffering from heat-related illnesses.

While sanitation workers fight on the frontlines to safeguard the city’s hygiene, their health is not sufficiently protected.  Learn more - ‘Impacts of extreme heat on street cleaners’ report (Chi only) ; ‘Sanitation Workers’ Working Conditions at Refuse Collection Points (RCPs) in Extreme Heat’

Life of a street cleaner in the intense heat 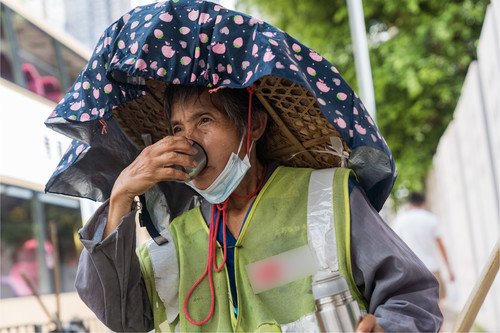 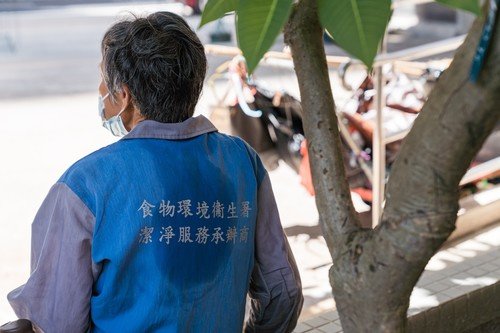 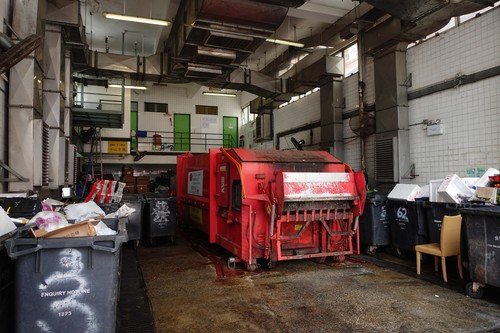 There is no refuse compactor in this RCP; waste is often piled up in a corner. Most of it is wet waste comes from the markets nearby. This has exacerbated the RCP’s pest problem and caused workers to feel unwell. 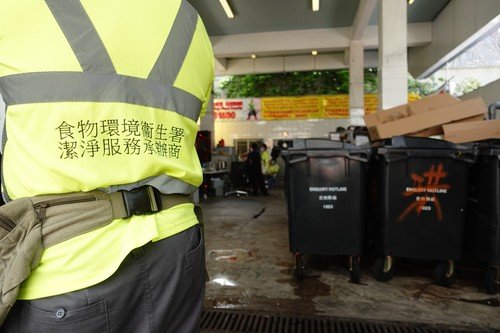 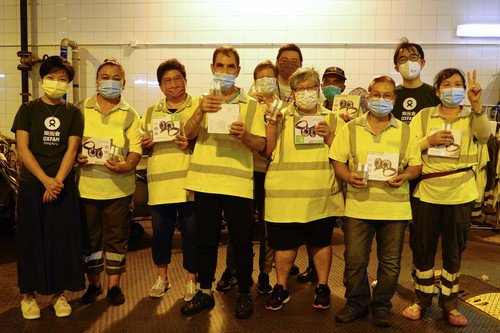 OHK distributing portable fans to 4,000 sanitation workers. This is being done to enhance their ability to adapt to climate change and reduce their risk of suffering from heat-related illnesses. 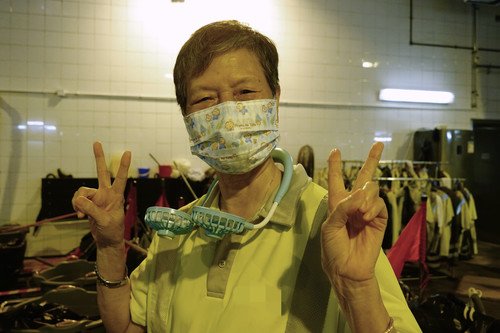 The workers were delighted to receive the new portable fans.

Climate change affects us all, but the poorest are the bearing the brunt of its effects. To see how it is affecting those who live in subdivided flats, we commissioned Social Policy Research Limited to interview 200 people from low-income backgrounds who lived in subdivided flat across Hong Kong in September 2021.

The study found that temperatures inside these flats were hotter than outside – some even 5.8 degrees Celsius hotter than outside. The hottest flat saw temperatures soar as high as 35.1 degrees Celsius. Nearly 70 per cent of respondents said that the intense heat affected their everyday lives, especially their physical health. They also found it difficult to work/study, and experienced more stress. Over a quarter of respondents also said that their flats would see some sort of damage during typhoons or rainstorms. Since some of their landlords were unwilling to pay for repairs, they were left to shoulder for the expenses on their own, which added to their financial burden.

Nearly 80 per cent of respondents had lived in their subdivided flat for over five years, while 35 per cent had lived in their flat for eight years or more. On average, respondents paid over HK$4,700 a month for rent. The average rent per square foot was close to HK$40, which is around HK$4.5 more than the average rent per square foot for private housing in Hong Kong.   Learn more about the impacts of extreme weather on subdivided flat residents

How bad will climate change get?

Global warming has become one of the most serious causes of famine, poverty, injustice and migration.

With just 1°C of global heating in recent years, deadly natural disasters have followed one after the other around the world. Cyclones have torn through Asia and Central America, leaving many homeless. And in Africa, huge locust swarms across the continent have severely damaged crops and ravaged farmers’ livelihoods. Over the last 30 years, the number of climate-related disasters has tripled.

People who live in poverty are often hit first and worst by climate change, but are least responsible for the crisis. The richest one per cent of people in the world, approximately 63 million people, are responsible for more than twice as much carbon pollution as the 3.1 billion people who make up the poorest half of humanity.  Learn more about how we’re fighting climate change. 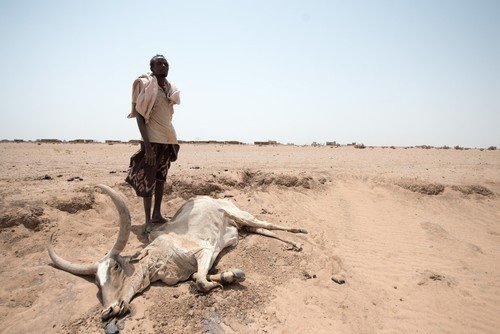 El Niños are getting stronger due to climate change. With one of the strongest El Niño ever recorded in 2016, irregular weather patterns in Ethiopia’s Somali region have made rainy season more erratic and unpredictable. Some villages have even seen no rainfall in over a year. Oxfam has been working with communities since 2011 to provide emergency water in the worst affected areas, to introduce disaster risk reduction measures and work with affected populations to develop their livelihoods and ensure food security. (Photo: Poon Wai-nang / Oxfam)

With climate change exacerbating El Niño events, many countries in East Africa have been devastated by severe droughts for years, resulting in long periods of food shortages for over 28 million people. Abnormally heavy rains since October 2019 have also contributed to a devastating locust outbreak. Thousands of acres of farmland have been destroyed by billions of locusts, threatening the food supply and economies of these countries. (Photo: FAO / Sven Torfinn) 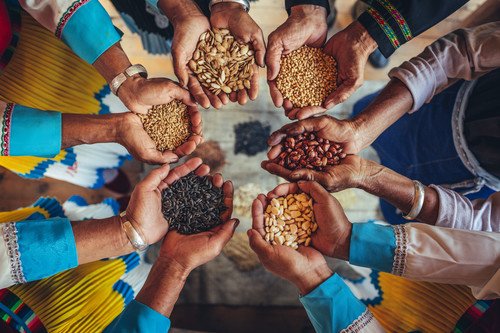 Climate change has brought about more sudden and extreme weather disasters, causing poor rural communities and small farmers to lose their crops (affecting both their food and income), shelter, property or even their lives. Oxfam and local community organisation Farmers' Seed Network provide farmers with training in the Guangxi Zhuang Autonomous Region to help them discover and preserve high-quality seeds. By producing fruit and vegetable varieties suitable for the local climate that differ from large-scale plantations, they can improve their competitiveness and incomes. (Photo: Wang Wenyan / Oxfam)

Oxfam's report ‘The Inequality Virus’ published in January 2021 revealed that the 1,000 richest people on the planet recouped their COVID-19 losses within just nine months, but it could take more than a decade for the world’s poorest to recover from the economic impacts of the pandemic.

Inequality is also a spiralling crisis in Hong Kong. The ‘Hong Kong Poverty Situation Report 2020’ published by the government shows that the number of people living in poverty in 2020 (before policy intervention) was as high as 1.653 million. And with the pandemic, the unemployment rate soared and even reached a 17-year high at one point. Although the unemployment rate dropped as cases started stabilising in Hong Kong, it still remains higher than pre-pandemic levels.  Learn more about the Inequality Virus.

The pandemic has had a huge impact on Hong Kong’s economy, and families experiencing poverty have been hardest hit. In the face of under- and unemployment, poor households have had no choice but to cut back on the basics like food and clothing to ease their financial burdens. When buying food, they often opt for whatever’s most inexpensive, but this can lead to a poor diet for their children. What makes matters worse is the lack of space in subdivided households; this limits the cooking methods they can use and the dishes they can make, so oftentimes their children become less interested in eating. Sometimes parents pander to their children’s tastes too often too and don’t consider the nutritional value of what they’re eating.  Learn more about Give a Meal: Oxfam's Food Support Project for Low-Income Families & ‘Give A Meal 2.0 – Mobile Nutrition Clinic’ Project

Cooking is quite a challenge for those in subdivided flats as bathrooms are often makeshift kitchens. 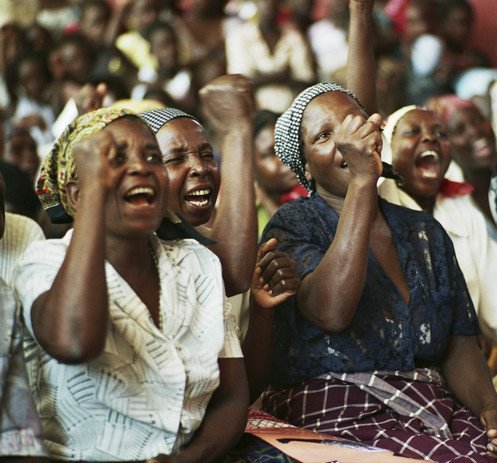